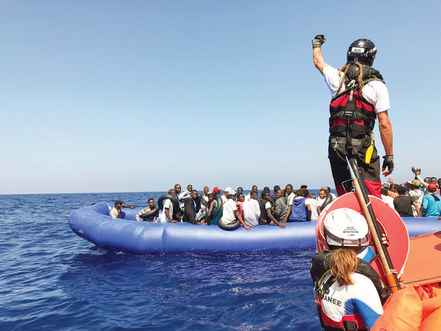 Spain is struggling to accommodate thousands of young migrants who over the years have arrived alone on rickety boats or hidden in trucks, some of whom have ended up on the streets or even become involved in crime.

There are currently around 14,000 unaccompanied young migrants in Spain, according to the government, up from just around 4,000 in 2016.

In regions like Catalonia in Spain's northeast, which has a large Moroccan community that attracts the youngsters after they arrive in the south, reception centres are overwhelmed.

In Barcelona, dozens sleep rough on benches, in parks or in makeshift camps hidden in the hills that surround this Mediterranean seaside city.

"They're damaged, many sniff glue. And they're very vulnerable on the street, criminal gangs take advantage and get hold of them," Peio Sanchez, a priest in charge of the Santa Anna church where young migrants sleep regularly, tells AFP.

In front of the church in a small, hidden square near the popular Ramblas avenue in Barcelona, two teenagers share a cigarette as they play on their mobile phones.

One of them sleeps in a juvenile centre. The other, Sofiane, lives on the street.

His child's thin and short body contrasts sharply with his hard appearance, his cheek scarred.

Orphaned when he was 10, he emigrated from Morocco to Spain hidden underneath a truck. He was sent to various centres far from Barcelona, but always ended up coming back to the city.

"My friends are here, my life is here," he says.

Adria Padrosa, a social worker at the church, says they persuaded him to go to a centre several weeks ago, but he returned the following day.

"He's a complicated profile, very used to living on the streets," he says.

The majority of the migrants the church tends to are no longer underage.

They were when they came to Spain, but when they turned 18 they were no longer given protection or support.

Spain automatically gives minors a residency permit but not a work one.

They can get a work permit after five years in Spain or if they get an annual full-time contract, which is hard to come by in a country with 32 percent unemployment among under 25s.

"You turn 18 and that's it. They give you your suitcase, they kick you out and bye bye," says Najib Benyaala, a 21-year-old Moroccan with curly hair he's dyed blonde.

"From one day to the next, you find yourself on the streets."

Athletic and smiley, Najib does boxing in a gym in Barcelona for vulnerable people, a haven of peace after years on the street, in squats or shelters.

"If they gave us work permits, we wouldn't all be on the street."

In Catalonia, just one percent of unaccompanied minors have a work permit when they turn 18, says Georgina Oliva, in charge of childhood matters in the regional government.

"Without this, it's very difficult."

Catalonia tends to 4,200 unaccompanied young migrants, a large chunk of the total in Spain.

That caused punctual scenes of chaos, with some youngsters sleeping on the ground in police stations for lack of room in reception centres.

Authorities have since opened 3,000 new places for unaccompanied minors.

"We've been warning about this for years but until the bubble burst, nothing was done," says Axel Roura of the NGO Casal dels Infants which looks for housing for homeless youngsters.

The presence of these young migrants has been sharply criticised by Spain's far-right which has identified them all as delinquents after some were caught robbing tourists, at times violently.

But the Catalonia region's Oliva maintains that over 80 percent of young migrants have never committed any crime, and only "a very small percentage repeatedly commit crimes."

"The huge majority wants to get training, work and send money home," she says.

Najib, who survives thanks to black market jobs and charity, hits out at this stigma.

"They say Moroccans are bad. They're not bad, they just don't have food or work.

"I'd like to be like everyone else, go get a coffee in the morning, sitting with my mobile, working, with a house, a family... But it's complicated."