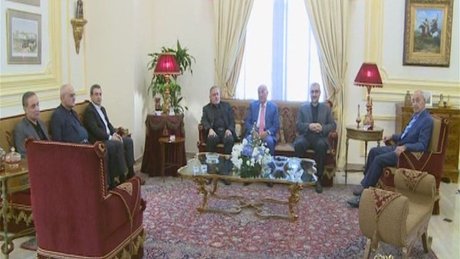 A reconciliation meeting orchestrated by Speaker Nabih Berri was held on Saturday in Ain el-Tineh between Hizbullah and the Progressive Socialist Party.

Delegations of Hizbullah and the PSP arrived at the Speakership residence in Ain el-Tineh after which Berri kept them for lunch.

Ties between the two took a negative turn since December last year and peaked against the backdrop of PSP leader Walid Jumblat’s repeated positions on the Syrian refugee crisis, and a license annulment to establish an industrial complex in Ain Dara.

Let’s never forget that Druze is an offshoot of Shiism which is also an offshoot of another offshoot of Islam. So, we shouldn’t look surprised when such people murder people and claim doing God’s work.

Now that they have reconciled for the 50th time, Shebaa Farms become Lebanese one again.