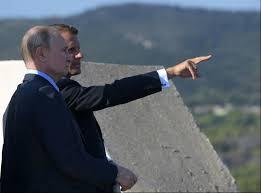 French President Emmanuel Macron senses an opportunity to bring Russia's Vladimir Putin back in from the cold and potentially help usher in peace in Ukraine, an ambitious -- and risky -- undertaking that Western allies might not welcome.

In the latest sign of Macron's diplomatic drive, France's foreign and defense ministers, Jean-Yves Le Drian and Florence Parly, will meet their Russian counterparts in Moscow on Monday, in the first so-called "2+2" format since Russia seized Crimea in 2014.

The annexation conjured up the specter of the Cold War, and Europe's mistrust of Moscow has only hardened since as Putin has opposed the West on crises including Syria and Venezuela.

Macron however has tried to keep lines open with Putin, and invited him for talks at his summer residence just ahead of last month's G7 summit.

After the meeting, he told France's diplomatic corps the time had come to move beyond "misunderstandings" and "rethink our ties with Russia".

In Moscow, the French officials will explore "paths for cooperation" on a series of high-stakes strategic issues, in particular Ukraine but also the wobbling Iran nuclear deal and the renewed arms race between the U.S. and Russia, an official in Parly's cabinet said.

It will be Macron's latest attempt to play mediator for the world's hottest conflicts.

"The stars are aligning a bit for Emmanuel Macron. He has the presidency of the G7 and the Council of Europe; Germany is no longer playing an active role in these matters; and London is paralyzed by Brexit," said Tatiana Kastoueva-Jean of the French Institute of International Relations (IFRI).

"He's the de facto leader of Europe, and can legitimately speak for the West," she said.

But despite his eagerness, Macron's track record is mixed at best.

Repeated efforts to bring Libya's warring factions to the table have come to nothing, and his attempts to find a political solution to the Syrian civil war have hardly rattled President Bashar al-Assad, who enjoys Moscow's backing.

And on Iran, despite his G7 coup of inviting Tehran's top diplomat for talks and signs of softening from US President Donald Trump, a resuscitation of the hard-won 2015 accord limiting Iran's nuclear ambitions seems unlikely.

Yet on Ukraine, where the new President Volodymyr Zelensky also appears determined to ease tensions with Putin -- not least with a breakthrough prisoner exchange on Saturday -- Macron might have better odds.

"Like any good politician, Emmanuel Macron is telling himself that if there's a chance of doing something on Ukraine, it's now," said Florent Parmentier, a researcher at Sciences Po university in Paris.

"It won't be easy but it's not a rash move," he added, pointing to France's "real diplomatic advance" by promoting Russia's return to the Council of Europe, the continent's foremost human rights body, last June.

Putin may be hoping to secure an easing of EU sanctions in return, and possibly a return to the G7 club of advanced democracies, but "he will never give back Crimea", Parmentier said.

France's European allies may consider that an acceptable price to end the Ukraine conflict, which has killed some 13,000 people over the past five years.

Putin may be all the more amenable to Macron's efforts as he faces discontent at home over a pension overhaul, as well as a flare-up in pro-democracy protests.

Paris has already called for a summit with the leaders of Russia, Ukraine, Germany and France in the coming weeks.

"But Vladimir Putin could also be bolstered by his intransigence against Europe. He's betting on the divergences among the Europeans," Kastoueva-Jean said.

Britain in particular won't be keen to give any ground against Moscow, which it blames for the attempted poisoning on its territory of the former spy Sergei Skripal last year.

And US Defense Secretary Mark Esper gave a lukewarm response to Macron's push after talks with his French counterpart Florence Parly on Saturday.

"It would be great if we could get Russia to behave like a more normal country," Esper said.

"But you also can't ignore the last many years of history where Russia has invaded Georgia, it has annexed Crimea, it is occupying parts of Ukraine, it is threatening the Baltic states," he said.

But Andrei Kortunov, president of the Russian International Affairs Council, says Macron and Putin need each other if they want to advance on the matters that mean the most to each.

"And today, President Macron is the best intermediary between Russia and the G7," he said.

AFP recommends that children younger than forty not read this message, and likewise those not suffering from neurological disorders, and those over forty years of age.
Russia will never be "out in the cold" and France, the way it is going these last two hundred years, will never be in from it. The saddest thing about an empire is the imperial capital. The empire inevitably drops away and the imperial capital continues to pretend that it is the master of the universe: a child's toy, on which a phenomenally bad movie is based.