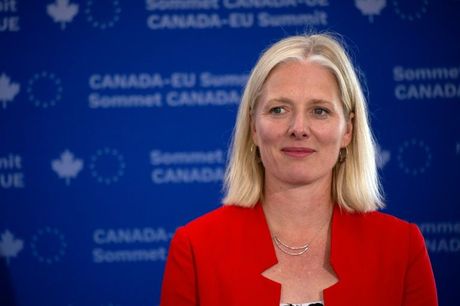 As the climate debate heats up ahead of Canada's elections, its environment minister has been assigned a security detail, she said Saturday, a move practically unheard of in a capital where top officials mingle with common folk.

It is not unusual in Ottawa and other Canadian cities to spot the foreign minister cycling to a news conference or the finance minister in line at a grocery store.

However abuse against Environment Minister Catherine McKenna, ranging from online vitriol to chilling confrontations, has been so harsh that she now sometimes requires security -- although details about the new measure were not released.

"The vocal sexism and hateful comments that are directed to people who work on climate change is unacceptable," McKenna said in a statement to AFP, explaining that it makes it harder to do her job and engage with people.

McKenna, who was responsible for charting Canada's CO2 emissions cuts by 30 percent from 2005 levels by 2030 under the Paris Agreement, has been wished dead and subjected to hateful sexualized insults.

She has been called disparagingly "Climate Barbie," garbage and an enemy of the people.

Political rhetoric and public discourse has reached such a dizzying low in Canada that a senior bureaucrat warned lawmakers in February that "the rising tide of incitements to violence" could lead to somebody being "shot in this country during the political campaign."

Recently, according to McKenna's office, a man rolled up next to her and her children outside a movie theater and hurled expletive-laced insults from an open car window.

The rattling is not only directed at Canadians. A former foreign minister, Maxime Bernier, this week called 16-year-old Swedish climate activist Greta Thunberg "mentally unstable," before walking back his comments.

Climate is expected to be a major ballot issue during the upcoming Canadian election in October, with the two main political parties, which are running neck-and-neck in the latest polls, taking opposite sides on the matter.

Liberal Prime Minister Justin Trudeau, seeking a second term, has cast himself as a champion in the fight against warming, while his main rival, Conservative leader Andrew Scheer has vowed to roll back the carbon tax as his first act in office, if elected.