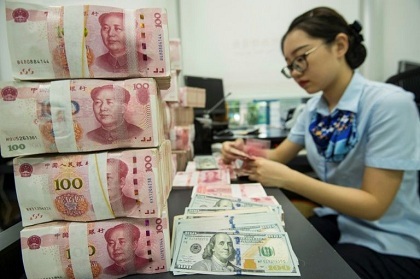 The People's Bank of China on Friday said it would slash the amount of cash lenders must keep in reserve to its lowest level in 12 years, freeing up more than $100 billion for the stuttering economy.

The announcement came two days ahead of the release of figures showing a contraction in imports and exports as the trade war with the United States bites deeper, with speculation that further measures could be on the way.

"Concerns of a more protracted trade war have already sapped business confidence in China and any way you want to slice and dice the data at the end of the day it makes for a convincing argument for the PBoC to turn on the monetary taps," said Stephen Innes, Asia-Pacific market strategist at AxiTrader.

Asian investors were broadly upbeat on the move, while a weaker-than-forecast reading on US jobs creation increased the chance the Fed will reduce borrowing rates again at its policy meeting this month.

The news suggested the world's number-one economy was also feeling the pinch from the trade row and the bank's boss Jerome Powell said in a speech Friday it will "continue to act as appropriate to sustain this expansion", while noting "significant risks" to growth.

Tokyo ended the morning 0.5 percent higher, Shanghai added 0.4 percent in the morning and Seoul jumped 0.6 percent. Sydney, Singapore and Taipei each added 0.1 percent while there were also gains in Jakarta and Manila.

Hong Kong rose 0.2 percent but gains were tempered by profit-taking after last week's surge as well as ongoing worries about months-long protests in the city, with fresh violence over the weekend.

Traders will turn their attention back to Westminster, where MPs are expected to pass a bill preventing Prime Minister Boris Johnson from taking Britain out of the European Union without a divorce agreement. Most economists have warned that a no-deal Brexit would hammer the economy.

The pound has enjoyed a rally since the new premier last week saw a number of his own party members help inflict a succession of parliamentary defeats that took control of the agenda out of his hands.

"Having failed to overturn the bill, fired... (nearly) 30 of his own MPs and failed to lure Labour (the opposition) into an early election, PM Johnson's next move will be to challenge the bill's legality in court while Parliament is in suspension," said Jeffrey Halley, senior market analyst at OANDA.

"He may sell it as all part of his cunning Brexit plan; the rest of the world will likely view it as a desperate rear-guard action."

Johnson's future has already been called into question less than two months after taking over at 10 Downing Street, and he suffered another blow at the weekend when one of his top cabinet ministers resigned in protest over his handling of the Brexit crisis.

On oil markets, both main contracts rose on the Chinese monetary easing as well as hopes for US trade talks, while a meeting this week of top producers from OPEC and some non-members will be pored over for signs of further output cuts.