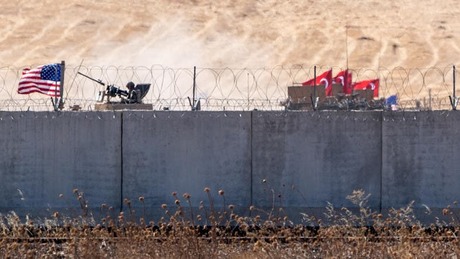 The United States' efforts to create a buffer zone in northern Syria have so far been "cosmetic", Turkey's foreign minister said on Tuesday, as he accused Washington of stalling.

NATO allies Turkey and the U.S. agreed last month to set up the buffer zone in Syria to keep Kurdish forces away from the Turkish border, launching joint patrols in the area on Sunday.

"There have been some joint patrols, yes, but steps taken beyond that... are only cosmetic," Foreign Minister Mevlut Cavusoglu told reporters in Ankara.

The safe zone is intended to create a buffer between Turkey and Syrian areas controlled by the Kurdish People's Protection Units (YPG).

Although Ankara regards the YPG as a "terrorist" offshoot of Kurdish insurgents inside Turkey, Washington sees it as a crucial ally against the Islamic State group.

Cavusoglu warned the U.S. against any delay in removing YPG positions from the border area, referring to previous warnings that it is prepared to launch unilateral operations against the group.

Turkey is worried about a repeat of the Manbij deal it struck with the U.S. last year.

The two countries agreed a road map in May 2018 to clear the YPG from Manbij in northern Syria, but Turkey says the withdrawal never happened as agreed.

Deputy commanders from the US Central Command and U.S. European Command were due to meet their Turkish counterparts on Tuesday, Turkey's defense ministry said on Twitter.

The military officials were due to discuss "future support" for the joint U.S.-Turkey operations center in southeast Turkey and other "key activities," CENTCOM said in a statement.

Hande Firat, a Hurriyet daily columnist, wrote on Tuesday that Turkish officials wanted a 440-kilometer (270-mile) zone along the border, and were unimpressed that the first stage of the agreement only covered a 120-kilometer area.

Firat added that Sunday's joint patrols were "just for show" on the part of the Americans, and that Turkish soldiers wanted to go far deeper into Syria than the five-kilometer area that they covered.

The issue was due to be discussed between Turkish President Recep Tayyip Erdogan and U.S. counterpart Donald Trump later this month on the margins of the U.N. general assembly.