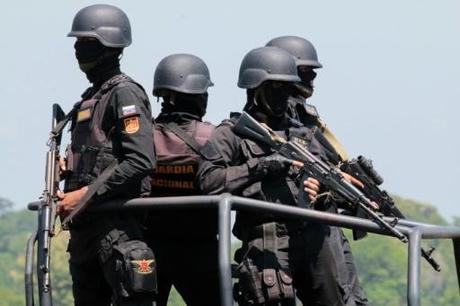 Venezuela's armed forces chiefs said Tuesday they had begun mobilizing 150,000 troops for military exercises on the Colombian border amid renewed tensions between Bogota and Caracas.

President Nicolas Maduro ordered his army to deploy along the 2,200-kilometer (1,400-mile) border after accusing Colombia of plotting to spark a military conflict.

Admiral Remigio Ceballos, chief of Venezuela's Strategic Command, told troops on the airport runway that they were part of a "peacekeeping force" -- but one that would not shirk combat if necessary.

"We respect the armed forces around the world, but we are not afraid of anyone," Ceballos said.

Maduro accused Colombia last week of using the rejection by dissident FARC leaders of a peace accord to try to provoke a military conflict and said he was placing his forces on high alert.

On Tuesday, Vice-President Marta Lucia Ramirez called on Colombians to remain "calm" and said Bogota would not respond to "provocations."

However, she said the military was prepared for "any external attacks."

"We call on all Colombians for calm, knowing that we possess a sufficiently equipped and capable public force," said Ramirez.

"We must not react to this threat, because it would be foolish to think it could be real."