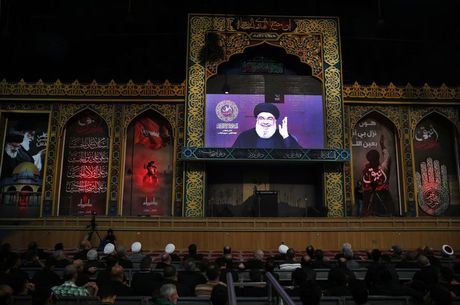 The Iran-backed group, which earlier this month exchanged cross-border fire with the Israel army, argued that steps towards closer Gulf-Israeli ties were emboldening Netanyahu against the Palestinians.

"Measures toward normalization and Gulf attempts to foster alliances with the enemy have created an opportunity to chip away at more Arab lands," Hizbullah said in a statement.

Netanyahu, who is campaigning for September 17 elections, said on Tuesday that if re-elected, he would annex the Jordan Valley and the northern Dead Sea.

Both are in the occupied Palestinian West Bank.

Gulf countries condemned Netanyahu's pledge, but Hizbullah argued that recent contacts between Israel and some of the US-allied, oil-rich monarchies had encouraged Netanyahu to take a more aggressive stance.

Hizbullah accused Gulf countries -- most of them rivals of its own sponsor Iran -- of "giving (Israel) a right of aggression against the Arab people of Lebanon and Palestine".

Egged on by Washington, several Gulf countries have recently taken steps toward a thaw in relations with Israel, which shares their hostility to Iran.

Why doesn't the iranian terrorist party go ahead and liberate Palestine and stop Israel's plans of annexation?

Plain and simple. Nasrallah and his terrorists know that the next time they start with Israel it will be the end of them. Israel this time will not stop until the last terrorist is no longer, the last weapons factory is destroyed and all their infrastructure is eliminated.
All of this will be done without any Israeli attack on peaceloving Lebanese citizens and the LAF (as long as it doesn't interfere).

lol@the western 'Christian' who is not a shia but only a sympathizer of shia with triple nationality.

What Hizbala says or believes is of little relevance in a free world. Bearded backward men have no weight even if they have parliament representation just like the Muslim Brotherhood terrorists do across the Middle East.

We’ve done enough for the Palestinians, it’s time to move on full stop.