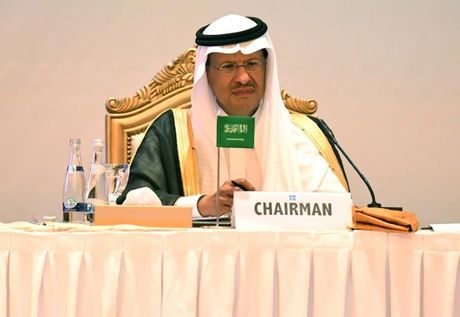 Riyadh has been shouldering the burden of existing production cuts, but other nations -- notably Nigeria and Iraq -- are accused of exceeding their quotas.

"Every country should live up to its commitments," new Saudi Energy Minister Prince Abdulaziz bin Salman said as a committee of producers charged with monitoring the cuts and assessing the oil market opened talks.

Prince Abdulaziz told the Joint Ministerial Monitoring Committee (JMMC) meeting in Abu Dhabi that it was imperative to restore stability in the oil market where prices have slumped to below $60 a barrel.

In a statement after the talks, the committee also emphasised compliance, saying that "equality, fairness and transparency" were essential.

Dubbed OPEC+, the 24-member alliance of cartel and non-cartel producers decided last year to cut output by 1.2 million barrels per day (bpd) from January 2019, to boost prices after they fell by more than 40 percent.

The cuts were extended by nine months until the end of March but that move failed to invigorate the market.

United Arab Emirates Energy Minister Suheil al-Mazrouei said on Sunday that the group will do whatever necessary to stabilise the market, and that further production cuts could be considered.

However, he admitted the issue was not entirely in the hands of the world's top producers, with the market no longer governed by supply but being influenced more by US-China trade tensions and geopolitical factors.

There was no good news from the latest International Energy Agency (IEA) monthly report, which said growth in global demand for oil is expected to remain subdued.

"International trade relations have further deteriorated in the past few weeks but US and Chinese officials announced that they would resume trade negotiations in early October," the Paris-based IEA said Thursday.

"Trade disputes and rising uncertainty about the impact of the UK’s possible exit from the European Union are reducing global growth through lower business and consumer confidence, supply chain re-assessments, declining investment and direct reduction of trade."

Against the uncertain backdrop, the IEA left its oil demand growth forecasts for 2019 and 2020, lowered in its previous monthly report, unchanged at 1.1 million barrels per day and 1.3 million bpd.

Russian Energy Minister Alexander Novak said Thursday that the OPEC+ alliance has managed in the past to "adapt and react to the changing market conditions."

Novak, whose country is the largest producer in the group, said producers are determined to achieve stability in the oil market.

The JMMC does not take decisions but makes recommendations for action which will be considered by the full OPEC+ ministerial meeting in December.

The Saudi energy ministry said on Twitter that Prince Abdulaziz's comment "underscores the key objective of the kingdom’s oil policy, which is to achieve market stability & stresses the importance of maintaining a high degree of cohesiveness among OPEC and non-OPEC producers, led by Russia."

The prince was recently promoted to the pivotal role, replacing veteran official Khalid al-Falih as the top crude exporter accelerates preparations for the much-anticipated IPO of its energy giant Aramco.

A son of King Salman, and half-brother to de facto ruler Crown Prince Mohammed bin Salman, he is the first member of the royal family ever put in charge of the kingdom's all-important energy ministry.

In his debut at the Abu Dhabi industry talks this week, Prince Abdulaziz -- a veteran of the industry with decades of experience -- has emphasised that existing Saudi energy policy will not change.

This Saudi, who is he? I gather he works for AFP. He gets coffee and issues reprimands.