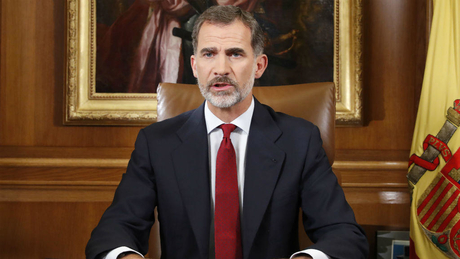 Spain's King Felipe VI will meet political party leaders early next week in a bid to break the political deadlock that could see the country heading for its fourth elections in as many years, his office said Thursday.

Sanchez now has until September 23 to be confirmed as premier by a deeply fragmented parliament -- or face fresh elections on November 10.

Polls suggest the Socialists would win more seats in such polls but still fall short of a majority.

Sanchez has failed to reach agreement with the far-left Podemos, whose support is key along with that of several smaller regional parties.

Seeking to break the logjam, the monarch on Thursday met with Speaker Meritxell Batet ahead of talks next Monday and Tuesday with party parliamentary leaders.

The king will try to "propose a candidate for the head of government who can count on the necessary support to win a (parliamentary) vote of confidence," a palace statement said.

Failing that, the parliament would be dissolved and new elections would be called, the statement said.

Sanchez was expected to receive a fresh mandate from the king to once again present his candidacy as head of government to parliament.

The Socialist leader came to power in June 2018 by winning a surprise no-confidence vote against conservative predecessor Mariano Rajoy with the support of Podemos as well as Catalan separatist parties and Basque nationalists.

But he failed twice in July to be confirmed by the assembly following a dispute with Podemos and its leader Pablo Iglesias that has yet to be resolved, with the two men trading accusations over the deadlock in parliament on Wednesday.

The Socialists had initially sought to form a coalition, albeit reluctantly, with Podemos, offering several government portfolios, but the party refused, saying the posts did not carry enough political clout.

Now Sanchez has taken the offer of a coalition off the table, offering Podemos only talks on a joint policy programme in the hope of establishing a minority government with ad hoc parliamentary support from the party.

"A last-minute deal is far from out of the question. If one does emerge, at this stage it would be more likely to involve a climbdown by Podemos... (rather) than the two successfully negotiating a full coalition agreement," said Eurasia Group senior analyst Federico Santi.

"Repeat elections are inevitably risky and could well fail to improve the standing of either party," he added.