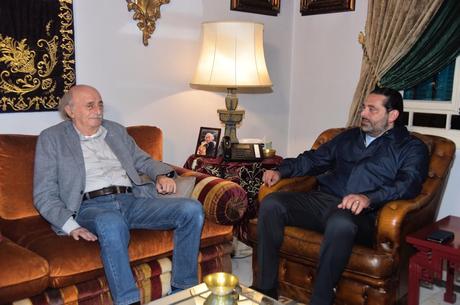 After the meeting, Hariri said: “I wanted to accept an old invitation from Walid Jumblat, whom I wanted to meet in light of the economic situation we are going through and discuss with him the economic issues and reforms that we must undertake, because the first concern of the citizen today is the economic situation. We have to work quickly, and today’s meeting was to coordinate positions that we may differ on, but the basis in the end is the country’s interest. We also tackled the situation in the region and its developments.

On the country’s 2020 draft budget Hariri said: “There have been discussions between ministers in the government. The main idea is to approve the budget within the constitutional deadline, this did not happen for a long time, but this is how it should be in the future.

The basis of this budget is to develop a three-year plan to meet all the challenges. We cannot ask anyone to take all the measures at once or carry out all the reforms within two or three months. This economic vision requires linking the budget to 2021 and 2022 budgets and be accompanied by measures we will undertake during the next two years, thus bringing Lebanon to safety.

Whether the government plans to impose new taxes in the upcoming budget, Hariri said: “The main idea in the 2020 budget was to look for new sources of revenues while seriously working to end smuggling and not increase or impose new taxes. Putting an end to smuggling would increase the state’s revenues, knowing that we must always remember that our economy is “going down” even if all the illegal crossings are closed. We should not expect very high revenues.

The main idea in this budget, as Minister Ali Hassan Khalil said, is to reach a budget in which spending equals revenues, with a deficit fixed at 7.6 or less, and that any future spending should be investment spending, whether in CEDRE, the McKinsey plan or others.”

On his planned trip to France to meet French President to launch CEDRE projects, the Premier said: “This is the main idea. We worked to establish a committee that includes Lebanon and all the donor countries to continue the transparency and the way projects will be implemented. There have been discussions about this committee, and we finished them now and hopefully we will be able to launch CEDRE projects in the next phase.”

To a question about the state appointments and resentment among ranks of the Lebanese Forces, he said: “We surely need to make appointments, the Lebanese Forces are a key component of this government, and everyone is aware of the friendship and the alliance that we have. But we should all know, including myself, that we cannot stop at any issue that might delay the work, especially during the coming six months because we don’t have the time or the luxury to delay things. The Lebanese Forces should definitely have a share, this will happen in the future and we discussed this issue with the Free Patriotic Movement.”

For his part, Jumblat said: “As Premier Hariri said, we will discuss some details that we may agree or disagree on, but this is an internal issue.”