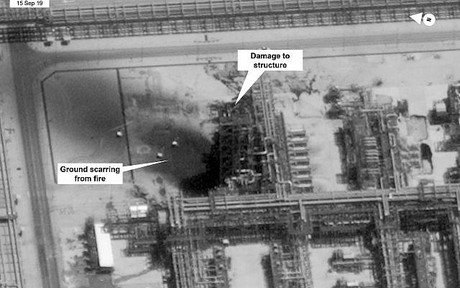 Saudi Arabia, the world's top oil exporter, is expected to restore Monday at least a third of the production lost to weekend attacks on two major oil facilities, according to experts and reports.

Saudi Energy Minister Prince Abdulaziz bin Salman said Sunday the kingdom would use its vast inventories to partially compensate for the lost production, and the US also authorised the release of its reserves.

The Energy Intelligence specialist newsletter cited industry sources as saying Aramco was "close to restoring as much as 40 percent" of the lost production, or about 2.3 million bpd.

The Wall Street Journal cited people familiar with the damage estimates as saying the hit facilities would take weeks to return to full production capacity.

However, one of its sources told the newspaper: "We should be able to have two million barrels a day back online... by tomorrow (Monday)."

Industry consultant Energy Aspects also estimated the country would be able to restore almost half the lost production as early as Monday.

Aramco said Saturday it would provide an update within two days, and all eyes are on official word on the state of play, which could offer reassurance to jittery markets.

A report by Saudi-owned Al-Arabiya television said Monday however that Aramco was ready to restart the Khurais plant, which handles 1.5 million bpd.

The kingdom also has a spare capacity of around two million bpd that it can draw on at times of crisis.

Yemen's Iran-aligned Huthi rebels have claimed responsibility for Saturday's strikes, one of the most destructive attacks on Saudi oil facilities, but the kingdom has not yet officially accused any side.

US Secretary of State Mike Pompeo pointed the finger squarely at Tehran, saying there was no evidence the "unprecedented attack on the world's energy supply" was launched from Yemen.

US President Donald Trump has raised the possibility of military retaliation, saying Sunday that Washignton was "locked and loaded" to respond to the attack.

Tehran denies the accusations but the news revived fears of direct conflict after a series of attacks on oil tankers in sensitive Gulf waters earlier this year that were also blamed on Iran.