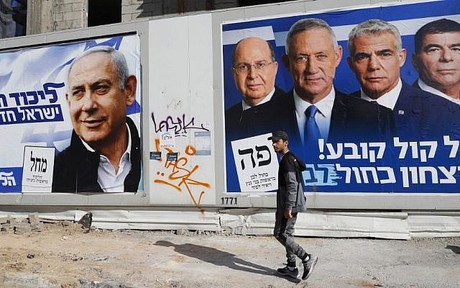 Israeli Prime Minister Benjamin Netanyahu and his main opponent Benny Gantz sought to galvanise supporters Monday on the eve of a tense election with the political fate of the country's longest-serving premier in the balance.

The vote on Tuesday will be Israel's second in five months after Netanyahu suffered one of the biggest defeats of his political career when he failed to form a coalition after April polls.

The slogan is a reference to what the staunch secularist says is the undue influence on politics of Israel's ultra-Orthodox Jewish parties.

Netanyahu has spent recent days seeking to boost turnout among his base, using a combination of warnings he could lose and a flurry of announcements welcomed by right-wing nationalists, key to his re-election campaign.

On Sunday night, he went as far as to cancel his appearance at the final rally for his right-wing Likud party, saying he was instead holding an "emergency consultation", warning the potential of low turnout could lead to his defeat.

For Israelis, it was a familiar tactic that Netanyahu has used repeatedly in the past -- though this time the risk may be greater since voter fatigue could play a role due to the repeat election.

He has also hit on his other campaign themes: portraying himself as Israel's essential leader, dismissing his main opponents as "weak" and "left" despite their security credentials, and highlighting Israel's economic growth.

Netanyahu has issued a controversial pledge to annex the Jordan Valley in the occupied West Bank if he wins -- a third of the territory.

He says he would then move to impose Israeli sovereignty over settlements in the wider West Bank in coordination with US President Donald Trump, whose long-awaited peace plan is expected to be released after the vote.

"We find ourselves at the high point of an historic change in the history of the Jewish people and the state of Israel," Netanyahu wrote in Maariv newspaper, which gave space to both of the main candidates to spell out their positions.

Gantz, an ex-military chief, has campaigned by presenting himself as an honourable alternative to Netanyahu, who is facing a possible corruption indictment in the weeks ahead.

He has repeatedly spoken of Netanyahu's willingness to form a coalition with far-right parties that could help him seek immunity from prosecution in parliament.

Gantz says he and his centrist Blue and White alliance would want to form a unity government that the vast majority of Israelis would support.

"Blue and White under my leadership will change the direction of the ship of state of Israeli democracy," he wrote in Maariv.

"No more instigating rifts in an attempt to divide and conquer, but rather quick action to form a unity government."

Netanyahu has also faced criticism over the final days of the campaign due to his unfounded warnings that the election could be stolen by fraud in Arab areas.

Israeli President Reuven Rivlin's choice to form the next government may depend on Lieberman, who polls show has gained in popularity due to his campaign against ultra-Orthodox parties, an important part of Netanyahu's coalition plans.

He accuses them of seeking to impose Jewish religious law on Israel's secular population and wants legislation ending the ultra-Orthodox's exemption from mandatory military service.

Opinion polls have given Likud and Blue and White around 32 seats each, and around 10 for Lieberman's nationalist Yisrael Beitenu.

Another stalemate cannot be ruled out.

Lieberman prevented Netanyahu from forming a coalition after April polls when he refused to relent on his demand related to military service for the ultra-Orthodox.

It is not clear he will endorse Netanyahu as prime minister again, which could be enough for Rivlin to allow Gantz to try to form a government.