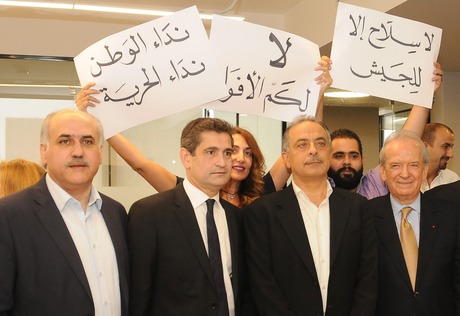 Lebanese journalists and politicians carried out a solidarity stand with Nidaa al-Watan newspaper on the eve of its appearance before the judiciary against its criticism of Iranian influence in Lebanon through Hizbullah party.

In its headlines the newspaper published an article it titled “New Ambassadors in Baabda ... Welcome to Khamenei’s Republic."

The Press Syndicate condemned the prosecution of journalists by the criminal investigations bureau, stressing that the only party eligible to prosecute journalists is the press offenses court of publications.

The Syndicate chief, Aouni al-Kaaki denounced the move saying: “We have noticed lately the political authority resorting to judicial measures to hold the press accountable, forgetting that the only body legally empowered to prosecute journalists is the Publications Court under Law No. 1 sentenced in 1977 during the government of PM Salim Hoss.”

Kaaki added: “The sentences should only be financial, as it is not allowed to imprison any journalist.”

Editor-in-Chief of Nidaa al-Watan, Beshara Charbel said he was aware that the “mission” he chose to defend the sovereignty of the State would have ramifications, “but we did not know the state has little patience to prompt summons to the criminal investigations bureau.”

In reference to the remarks made by Hizbullah leader Sayyed Hassan Nasrallah, he added: “We said it is Khamenei's republic and we only repeated explicit statements declaring that any aggression against Iran would rattle the region and bring Lebanon into war.”

Earlier in September and marking the last day of the Shiite Ashoura commemorations, Nasrallah voiced support for Iran in its dispute with the United States.

On Khameni he said: “Our imam, leader, master and Hussein in this era is Grand Ayatollah Sayyed Ali Khamenei. He is the leader of the axis of resistance and Iran is the heart and main center of the axis.”

Lebanon has become a police state and a dictatorship under the strong president.

This is dramatic, freedom of press and speech are in danger. The regime is trying to silence us!
Even Naharnet censors commentators in fears of being prosecuted by the anti democratic forces in control of Lebanon.

The signs whatever is left of this so-called republic is obvious to everyone it's descending into a fascistic/dictatorship ruled by the gun. Typical of more recent dictatorships that surrounded a once free society.

Freedom of the press and freedom of expression is severely under threat if not already silenced.

lol @ blacacabla
The Joke of the Day
Like Every Single Day

blablabla is my favorite shia troll