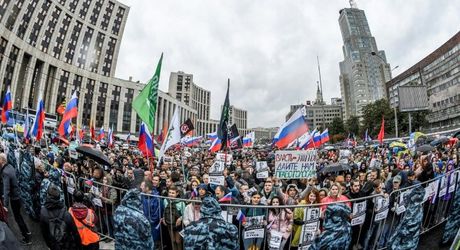 About 200 Russians including actors and musicians staged a protest on Wednesday outside the presidential administration in Moscow in support of jailed demonstrators amid a crackdown on the opposition.

The sentencing of one man --- young actor Pavel Ustinov -- sparked particular outrage, triggering a rare campaign of solidarity among popular actors and other Kremlin-friendly celebrities.

Dozens of stars with millions of followers on social media who usually steer clear of politics took to Instagram, saying Ustinov, who was sentenced to three and a half years in prison for violence against police, was simply an innocent bystander.

On Wednesday, the campaign of support gained momentum, with scores of people including several popular actors staging one-man pickets outside the presidential administration offices.

It is the only kind of demonstration Russians are permitted to hold without giving prior notice to the authorities.

One by one, the protesters held a placard calling for freedom for Ustinov while others waited their turn in a long line.

Others said all the jailed protesters should walk free, brandishing a placard "I am/We are the entire country."

"This is about everyone," popular actress Alexandra Bortich said at the protest. "There's a feeling that something went wrong," added the 24-year-old.

The celebrities have compared Ustinov's case with that of journalist Ivan Golunov, detained in June on trumped-up drug charges.

He was freed after an unprecedented campaign of solidarity, which saw three major newspapers publish the same front page with the headline "I am/we are Ivan Golunov".

In an unprecedented move, 70 Orthodox clerics have joined the solidarity campaign.

In an open letter, published by the popular news site Pravmir which covers religious and other issues, the priests said the court rulings were apparently aimed at "intimidating" society.

In yet another open letter, more than 260 teachers slammed "egregious lawlessness" and called for punishment for those who violated the law and jailed the protesters.

Ustinov's lawyer, Dmitry Cheshkov, said he appealed the verdict but a court ruling had yet to be set.