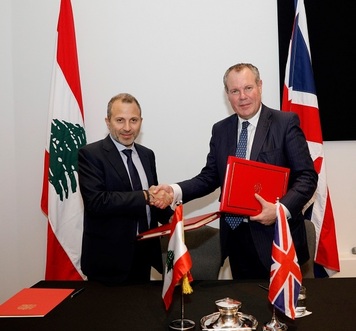 Trade Policy Minister, the Rt Hon Conor Burns MP and the Lebanese Minister for Foreign Affairs and Emigrants, Jebran Bassil signed a UK-Lebanon trade agreement. It ensures British businesses and consumers will continue to benefit from preferential trading terms with Lebanon after we leave the European Union, UK embassy said in a press release.

The signature of the UK-Lebanon Association Agreement at the UK-Lebanon Tech Forum in London will provide a framework for cooperation and development on political, economic, social and cultural links, it added.

The new UK-Lebanon Association Agreement provides, among other trade benefits, tariff-free trade of industrial products together with liberalisation of trade in agricultural, agri-food and fisheries products. Trading on these preferential terms delivers significant savings, helping to support British jobs and also providing a positive boost for Lebanon’s economy, which continues to be impacted by the Syrian crisis.

This agreement provides a platform for trade between the UK and Lebanon to grow, with total trade worth £603 million in 2018. It also provides the certainty for British and Lebanese consumers and businesses to continue trading following the UK’s withdrawal from the EU. The agreement sends a strong signal that Britain is committed to a close bilateral relationship with Lebanon.

“Our priority is to ensure businesses are fully prepared and have the tools they need to continue to trade by the 31 October. Today’s signing with Lebanon will help provide certainty and opportunities for businesses in both the UK and Lebanon.

“I hope that this Agreement will usher in a new phase of increased bilateral investment in each other’s economies, which is the basis for continued stable economic growth.”

“I welcome the signing of the UK-Lebanon Association Agreement, which provides certainty and confidence to UK and Lebanese consumers and businesses as we leave the European Union.

“The economic and trade relationship between our two countries holds much potential. I look forward to more British and Lebanese companies doing business with each other, investing and operating in the UK and Lebanon as a result of this Agreement.”

“Lebanon represents un-tapped opportunities for UK companies, especially in new technologies, creative industries, infrastructure and energy, and as a gateway to the Middle East.

“This Agreement promotes our countries’ political, economic, security and cultural cooperation and will ensure continuity, lead to more liberalisation, and present opportunities to do more together.

“The UK supports Lebanon’s economic reform programme, and recognises the potential opportunities for much deeper trade and investment ties between our two complementary economies and their global diasporas.”

There’s a corruption investigation against Bassil in what was labeled as the uraniumgate and a company based in Lebanon (Metn) Optima Energy Offshore SAL . A very complex scheme going across 4 countries....

You can see the check worth 300 million USD just google “uraniumgate Lebanon.”

No one can touch him, if you have google earth pictures of him but naked doing the horizontal bop with his pet horse his following sheep will claim its a fake.

This being said, the complicated scheme is split between France, Russia, Niger, Lebanon.

Aren’t these countries involved in the oil exploration off Lebanon ? Niger excluded because they supply the uranium.

Surely, this nonsense agreement justifies Bassil and his entourage's travel expenses at a time when the treasury is bankrupt.

An agreement that will surely lead into Lebanon being further in debt and our ministers pocket expanding.

Fouthians just like Houthians cannot be trusted and should be tried for treason. This Fouthian is anti-women, anti-humanity, and anti-decency. When Jannah and Firdous arrive here in Canada I will arrange for a meeting with our Prime Minister Mr. Handsome Trudeau to discuss the possibility of sanctioning this Fouthian and arresting him once he sets foot in Canada.