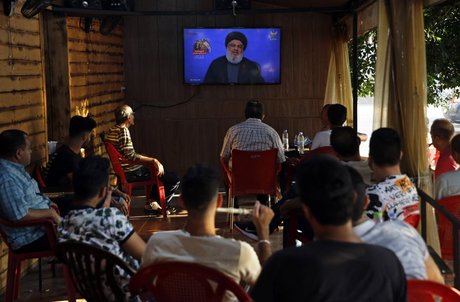 The leader of Hizbullah on Friday called for Saudi Arabia to stop its war in Yemen, or else face more attacks on its soil.

In a televised speech, Hassan Nasrallah warned Saudi Arabia and the United Arab Emirates not to incite war "because your houses are made of glass."

The U.S. accuses Iran of being behind recent drone-and-cruise-missile attacks that knocked out more than half of Saudi Arabia's daily crude oil production. Saudi Arabia has said "Iranian weaponry" was used.

Iran denies any involvement, and Yemen's Houthi rebels claimed responsibility. A Saudi-led coalition has been battling the Houthis since March 2015.

But analysts say the missiles used in the Sept. 14 strikes wouldn't have enough range to reach the site from Yemen.

Both Hizbullah and the Houthis are backed by Iran, and consider themselves part of the so-called axis of resistance that includes the Syrian government and powerful Shiite militias in Iraq.

"Continuing the war against Yemen with no solution is a pointless. You are starting to pay the price," Nasrallah said.

"One strike knocked out half the oil production, and another strike, you can imagine what it will do," he said.

"This attack shows the strength of the axis of resistance," Nasrallah said.

He added that Saudi Arabia "should think well, as a war with Iran will mean their destruction."

Iranian Foreign Minister Mohammad Javad Zarif has warned that any retaliatory strike on Iran by the U.S. or Saudi Arabia will result in "an all-out war."

Tensions between the U.S. and Iran have been heightened following the collapse of Iran's 2015 nuclear deal with world powers, more than a year after President Donald Trump unilaterally withdrew the U.S. from the accord.

The International Crisis Group warns that the Saudi attack could push the wider Persian Gulf into war, saying the risk of conflict is "arguably the highest it has been in years."

Is it April's fools day or something ? Good one.

Nasrallah warned Saudi Arabia and the United Arab Emirates not to incite war "because your houses are made of glass."

The leader of Hizbullah on Friday called for Saudi Arabia to stop its war in Yemen, or else face more attacks on its soil.

and why is this iranian shia terrorist involved in Yemen?

Houthians can never be trusted. If you are ever stuck in the Indonesian rain forest between a Python and a Houthian, befriend the Python and kill the Houthian.

Blessed be the python !

We have no other political figure that cares so much about Yemen, Iran, Palestine, Syria, Israel...

this man depicts the pure definition of treason

Procter and Gamble would like to sponsor his videos, they’d like to know his address in order to send him soap and shampoo for product placement. The contract does mention using them once before recording the video.

I’ve got to email P&G, they ignore this important fact. This sub-sub-culture is unknown to the developed and civilized world.
This being said, they must really stink...

Isn't it about time that Nasrallah concentrated on the matters at hand in the country he is living in, Lebanon?
I bet SA leaders are shivering in their shoes after this declaration of his.