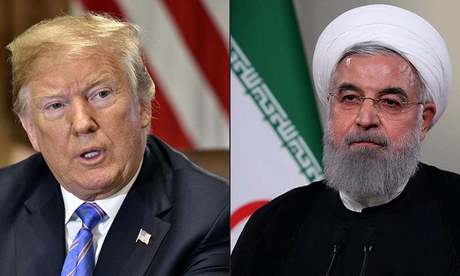 Tensions between Tehran and Washington have spiralled since US President Donald Trump came to power, quit the multilateral deal on Iran's nuclear programme and reimposed sweeping sanctions.

Here is a recap.

In a landmark address to Middle Eastern leaders in Saudi Arabia on May 21, 2017, just months after taking office, Trump urges nations to work together to isolate Iran.

"From Lebanon to Iraq to Yemen, Iran funds, arms and trains terrorists, militias and other extremist groups that spread destruction and chaos across the region."

The Iranian government, Trump claimed in an address to the United Nations on September 19, 2017, "has turned a wealthy country with a rich history and culture into an economically depleted rogue state."

Trump on May 8, 2018 pulls the US out of the nuclear pact between world powers and Iran.

The move heralds the reinstatement of US sanctions on Iran and companies with ties to it.

On August 7, Washington reimposes a first set of sanctions that involve freezing financial transactions and imports of raw materials, as well as penalties on purchases in the car and commercial aviation industries.

A second wave of US sanctions comes into force on November 5, described by Washington as the "toughest" yet.

From May 2019, tensions rise between Washington and Tehran after acts of sabotage and attacks on oil tankers in the Gulf, blamed by the US on Iran, which denies the charges.

The next day Trump approves a retaliatory strike, but cancels it at the last minute.

On July 18, Trump says the US military has taken down an Iranian drone that came dangerously close to one of its naval vessels in the Strait of Hormuz. Iran denies the claim.

On September 7, Iran says it has fired up advanced centrifuges to boost its enriched uranium stockpiles.

It is the latest step in scaling down nuclear commitments following Washington's withdrawal from the accord.

Since May it has exceeded the enriched uranium stockpile permitted by the accord and begun enriching to above 3.67 percent, to a level of at least 4.5 percent, but still far from that required for military use.

On September 20 Trump announces "the highest sanctions ever imposed on a country", hitting Iran's central bank.

But he indicates he does not plan a military strike, calling restraint a sign of strength, while stressing it would be "the easiest thing... (to) knock out 15 different major things in Iran."

The new sanctions come after September 14 attacks on two oil facilities in Saudi Arabia, which Washington blames on Iran.