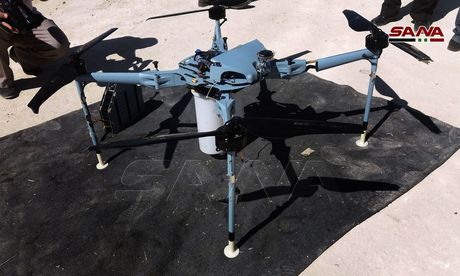 SANA gave no further details about the drone but posted several photos of the unmanned aerial vehicle.

The Britain-based Syrian Observatory for Human Rights, an opposition war monitor, said it was not clear if Syrian troops or members of Lebanon's Hezbollah controlled the drone. Hezbollah has fighters in different parts of Syria where they are fighting on the side of President Bashar Assad's forces.

The incident came two days after another drone was destroyed over the Damascus suburb of Aqraba, where an Israeli airstrike killed two Hezbollah operatives last month.

No one claimed responsibility for the drones Saturday.

In neighboring Lebanon, a government investigation concluded Thursday that two Israeli drones were on an attack mission when they crashed in the capital last month, one of them armed with 4.5 kilograms (10 pounds) of explosives.

Meanwhile in neighboring Turkey, President Recep Tayyip Erdogan on Saturday expressed frustration with what he said was the United States' continued support for Syrian Kurdish militants.

Speaking to reporters before his departure for the U.N. meetings in New York, Erdogan reiterated that Turkey had completed all preparations for a possible unilateral military operation in northeast Syria, along the Turkish border east of the Euphrates River.

Last month, Turkey and the United States agreed to take steps toward establishing a so-called "safe zone" in the area that would keep U.S.-backed Syrian Kurdish forces away from Turkey's border. Turkey has, however, warned that it will not allow the United States to delay the establishment of the safe zone and has threatened to launch an operation on its own within two weeks.

Ankara considers the Syrian Kurdish fighters to be "terrorists" due to their links to Kurdish rebels in Turkey.

"We have no wish of confronting the United States," Erdogan said. "However, we don't have the luxury of ignoring the support that the United States is giving terrorist organizations in an area where it was not invited to be."

Erdogan said he would discuss the issue during a possible meeting with U.S. President Donald Trump in New York.

What an ugly drone. Surely the Israelis have nicer designs than this prehistoric looking drone.