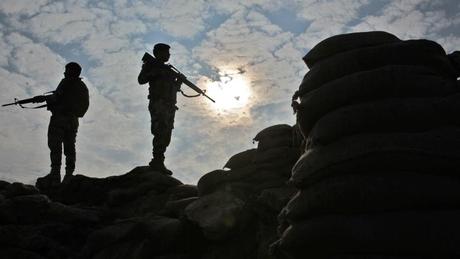 Seven people have been killed in three attacks in the northern outskirts of the Iraqi capital, security sources said Sunday, despite the army recently declaring the area swept of jihadists.

The overnight attacks Saturday into Sunday targeted the homes of tribal fighters belonging to the powerful Hashed al-Shaabi paramilitary force, as well as army barracks, in the Sunni suburb of Tarmiya, the sources said.

The Tribal Hashed is composed largely of Sunni fighters and feeds into the broader Shiite-dominated Hashed al-Shaabi, which fought back the Islamic State group with Iraqi troops.

Tarmiya has long been a bastion of Sunni extremist groups and IS sleeper cells have continued to operate in the area, according to the security sources.

"Unidentified gunmen attacked the home of a member of the Tribal Hashed, killing him, his wife, his son and mother," a police officer told AFP, asking to remain anonymous.

And at dawn on Sunday, another attack targeted a Tribal Hashed member's home, killing one, he added.

On Sunday afternoon, security forces announced they had killed one would-be suicide bomber in a village in the Tarmiya region.

For weeks this summer, Iraqi forces -- the army, police and the Hashed -- combed the orchards around Tarmiya for IS sleeper cells.

In July, they declared the operation a success after arresting several alleged IS members.

IS overran large parts of Iraq and neighbouring Syria in 2014, declaring a "caliphate" in areas they controlled.

Iraq in late 2017 declared victory against IS but the group's disparate network of undercover fighters still carries out deadly attacks across the country.

On Friday, an attack claimed by IS killed 12 people on the edge of Karbala, as the Shiite holy city prepares to receive millions of pilgrims next month.