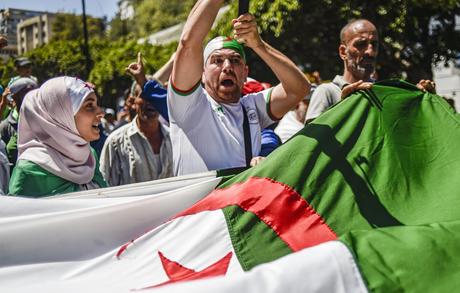 An Algerian military court has sentenced the brother of former president Abdelaziz Bouteflika and three co-defendants to 15 years in prison, the state APS news agency reported on Wednesday.

Said Bouteflika, widely seen as the real power behind the presidency after his brother suffered a debilitating stroke in 2013, went on trial on Monday alongside two former intelligence chiefs and a political party head.

Their convictions are the most prominent so far in a string of prosecutions of prominent politicians and businessmen over alleged graft launched since Bouteflika was pushed out in April after two decades in power.

All four defendants were convicted of "undermining the authority of the army" and "conspiring" against the state in order to bring about regime change, in the run-up to the ageing president's resignation in the face of mass protests earlier this year.

Prosecutors at the military court in Blida, south of Algiers, had asked for the maximum sentence of 20 years against all the defendants, defence lawyer Miloud Ibrahimi said.

Former defence minister Khaled Nezzar has said that as protests mounted against the veteran leader, Said Bouteflika met with the other defendants to discuss declaring a state of emergency and firing army chief General Ahmed Gaid Salah.

Lawyers for Workers' Party chief Louisa Hanoune have admitted she met the president's brother and General Mohamed Mediene on March 27, a day after Gaid Salah publicly called for the ailing president to step down.

Hanoune, Mediene who headed the all-powerful secret service for 25 years, and fellow ex-spy chief General Athmane Tartag were all given 15 years alongside Said Bouteflika.

Nezzar, his son Lofti, and a former businessman Farid Benhamdine, were all also sentenced to 20 years in absentia, APS said.

Said's detention in May was part of a wave of arrests targeting the ousted president's inner circle.

The hearings were restricted to lawyers and defendants' families only, with media also kept out of the courtroom.

Mediene, whose health has been deteriorating according to his family, arrived in court in a wheelchair and asked for an adjournment, according to defence lawyers. The judge consulted a doctor and turned down the request.

Known as Toufik, Mediene headed the all-powerful DRS intelligence agency from its foundation in 1990 up to his fall from grace in 2015.

Tartag, his deputy, succeeded Toufik and when the DRS was dismantled in 2016 he served as Algeria's security coordinator under the supervision of the presidency.

Presidential elections have now been set for December 12, but protesters have kept up demands for political reforms and the removal of the former president's loyalists, including army chief Gaid Salah, who has emerged as Algeria's strongman since Bouteflika's fall.