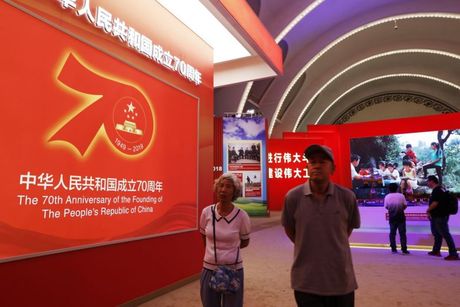 Key dates in the history of communist China, founded 70 years ago.

After the defeat of the nationalists in a civil war, Communist Party chairman Mao Zedong proclaims the establishment of the People's Republic of China on October 1, 1949.

The nationalists flee to the island of Taiwan and form a government in Taipei.

In the Hundred Flowers campaign of 1956-1957, Mao urges intellectuals to criticise the Communist Party, later sending 500,000 of those who speak out to labour camps.

It results in economic catastrophe and a three-year famine in which as many as 45 million people perish.

In 1959 Beijing sends soldiers to crush a revolt in Tibet against Chinese rule. The Dalai Lama, Tibet's spiritual leader, flees to India.

In 1964 China obtains the nuclear bomb.

The drive sees armies of youthful Red Guards targeting anyone deemed to be part of the bourgeoisie, including intellectuals and academics.

It unleashes chaos, with millions of people persecuted, imprisoned or killed until the army re-establishes order in 1969.

Beijing takes China's seat at the United Nations, which had previously been held by Taipei.

It becomes one of five countries to have a permanent seat at the UN Security Council.

Mao dies in September 1976 and the next month the "Gang of Four" -- powerful party members who directed his Cultural Revolution and include his wife -- are arrested.

They are accused of being "anti-Party and anti-socialist", and sentenced to long jail terms.

The death toll is estimated at between several hundred to over a thousand.

Britain returns Hong Kong to China at the end of a 99-year lease and with the pledge that the commercial and financial hub will be able to maintain a high degree of autonomy for 50 years.

In 2010 China overtakes Japan as the world's second biggest economy after the United States.

In March China's parliament endorses a move by Xi Jinping -- in power since 2012 -- to abolish a 10-year limit on presidential terms.

Xi's name is also added to the constitution, enhancing the authority of China's most powerful leader since Mao.

The UN accuses China in August of detaining up to one million Uighurs and other Muslim minorities in "reeducation" camps as part of a long-running crackdown.

Chinese authorities say the camps are being used to halt separatist sentiments and religious extremism.

Hong Kong is rocked by months of massive and increasingly violent protests sparked by a government bill that would allow extraditions to mainland China.

Pro-democracy protests continue even after the bill is withdrawn in September, in the biggest challenge to China's rule since the 1997 handover.