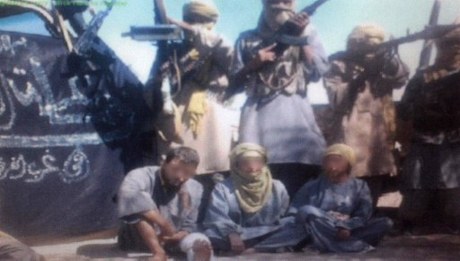 Mali's army has deployed extra troops and military equipment to its largely-desert north where Al-Qaida in the Islamic Maghreb operates, officials said Friday.

"The Malian army has deployed men, equipment and over 200 vehicles to the north," an administrative source said.

"Today our men are in Tinzawaten (near the Algerian border) to secure our country," a Malian officer based in Gao said on condition of anonymity as he was not authorized to talk to the press.

She said Tuareg rebels recently returned from fighting in Libya who had settled near the town had fled upon the arrival of the armed forces.

On Thursday, AQIM threatened to kill five Westerners kidnapped in Mali in late November if there were efforts to rescue them.

"We send a warning to France, Britain, the Netherlands and Sweden: if they authorize this operation it will mean the death of their nationals and amount to an attempt on their lives," AQIM said in a statement in Arabic.

"According to information we have received, the alliance of crusaders led by France, which supports certain regimes like those of Algeria and Mauritania, is preparing an imminent military operation to free their hostages."

The statement was emailed to AFP in Rabat and carried by the ANI news agency in Mauritania which has published several AQIM statements in the past. These have never been disclaimed.

Thursday's warning came three weeks after Mali and Algeria agreed to boost military cooperation in the fight against AQIM, and diplomatic and military sources in Bamako say Algerian soldiers are in the north for support.