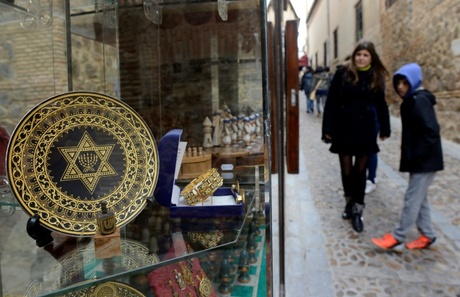 More than 500 years ago, they faced a bleak choice: convert to Catholicism or be burned at the stake. The only other option was exile.

For Jews living in Spain at the time, 1492 was a year burned into historical memory when their community of at least 200,000 people were forced into exile.

Now, more than five centuries later, over 132,000 of their descendants have taken advantage of a limited-term offer of Spanish nationality that expired on Monday.

The law, which was passed by parliament in October 2015, sought to address what the government has described as a "historic mistake" by King Ferdinand and Queen Isabella.

Known as Sephardim -- the Hebrew term for Jews of Spanish origin -- many of the exiles fled to the Ottoman Empire or North Africa and later to Latin America.

Under the legislation, those able to prove their Jewish heritage and their "special connection" to Spain were able to apply for citizenship, with justice ministry saying it received 132,226 applications.

More than half of them were filed in the past month, when the ministry received some 72,000 applications.

- 'Taken something from my family' -

"They said you didn't need a lawyer but without one, it would have been impossible," said Doreen Alhadeff, a resident of Seattle who obtained Spanish nationality for herself and two grandchildren.

But it was a long and complex process, that involved demonstrating proof of Sephardic origin through genealogical documents or through the local Jewish community.

Those documents then had to be taken personally to Spain to be approved by a local notary -- a process Alhadeff says cost her around $5,000.

"I felt they had taken something important away from my family, and I wanted to get it back," said this 69-year-old who says she remembers hearing Ladino spoken as she grew up, a 15th-century language fusing Hebrew and Spanish that is still spoken today.

Others are still waiting to see if their application will be accepted, among them the French writer Pierre Assouline, who has written many books, including one about his Sephardic origins entitled: "Return to Sepharad" -- Hebrew for Spain.

"I have French friends who have got a (Spanish) passport much faster. It's surprising and disappointing," said the writer, who filed his applications nearly four years ago, along with a letter from King Felipe VI.

So far, only 6,000 people have been granted citizenship.

- Reconnecting with their roots -

"We knew since the start that it was going to be a law with some complications regarding the means of proof," admitted Miguel de Lucas, head of Madrid's Centro Sefarad, a meeting place for Jewish communities in the Spanish capital.

But, he added: "It's better to have a law with some complications than no law at all."

Maya Dori, an Israeli lawyer who has lived in Spain for 17 years, has been deeply involved in the process, helping about 500 people from countries as far apart as Uruguay, Panama, Costa Rice, England and Turkey.

In helping people track down their ancestry, she had seen many "going on a personal journey, reconnecting with their roots and discovering many things about their families".

In her own case, it took seven years to get citizenship under a previous law dating back to 1924.

But unlike the recent legislation, applicants had to relinquish any other citizenship and were required to live in Spain.

Dori told AFP she traced her own lineage through her grandmother, who was born in Libya and emigrated to Israel in the 1950s and "used to speak a rare mixture of Italian, Spanish and Libyan Arabic".

But it is not only an attachment to historical ancestry that has provided a draw, says Gonzalo Manglano, head of the Cervantes Institute in Istanbul, pointing to the lure of a European passport for those from countries Turkey.

"Both things carry a lot of weight," he said.

Although those applying did not have to be practicing Jews, they needed to pass a Spanish language test as well as answering questions on Spain's culture and society.

A similar scheme has been launched in Portugal at the same time which did not require a language exam.