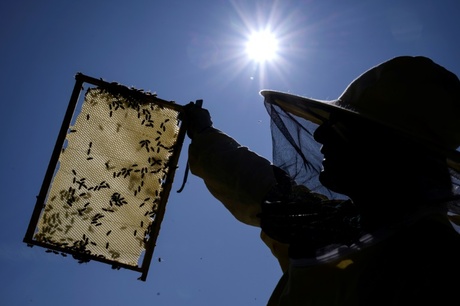 Unusual weather driven by climate change is wreaking havoc on bee populations, including in northern Italy where the pollinating insects crucial to food production are struggling to survive.

Italian winters have in general become milder and shorter, and this year -- just as in 2017 -- a warm spring arrived early, only to be followed by hailstorms and an abrupt return to lower temperatures.

"This was the most difficult harvest of my life," beekeeper Riccardo Polide says, fighting back tears at the fate of his hives in Mondovi, around 80 kilometres (50 miles) south of Turin.

The bees could make only "pitiful quantities of honey, not even enough to keep alive", he told AFP.

A bitter blend of increased pesticide use, falling prices due to foreign competition and climate change -- which affects whole ecosystems, including bees and plants -- has hit keepers like Polide hard in recent years.

Like many others whose livelihood depends on the buzzing insects, Polide had to feed his colony fructose-based syrups this year to make sure they did not die of hunger.

"The spring season started well, but there was a sudden cold snap that seriously affected the blossoming of flowers," he said.

Acacia blossoms, the source of one of the best-loved types of honey, were especially scarce.

Meanwhile in Demonte, another area in Italy's Piedmont region near the French border, Lidia Agnello also saw her bees "starving to death".

She and her husband tried moving their hives several times to follow the flowers as they bloomed, but that failed and this year's honey harvest has been their worst yet.

Beekeepers in Italy have seen "repeated poor harvests over the past seven years", says Samuele Colotta, a technician at Aspromiele, the local association of honey producers that Agnello chairs.

"Plants have had a regular annual life cycle for millennia. Changes to the climate and exceptional rainfall create problems. They no longer offer optimal pollen and nectar," he warned.

Bees are also being poisoned by pesticides while increases in carbon dioxide in the atmosphere affect nectar production.

The mass import of foreign honey -- particularly from China -- has also driven down prices, meaning Italian producers struggle to make enough profit to cover their costs.

There is currently no European legislation requiring sellers to specify the origin of honey, and many beekeepers say Chinese blends are "adulterated", for example by being cut with syrup.

"The situation is desperate," Agnello's husband Maurizio Biancotto said, standing in a small, almost-empty workshop in the basement of the couple's house overlooking the mountains.

Aspromiele has asked the government to declare a natural disaster so beekeepers can benefit from aid, such as a moratorium on loan repayments.

"It would give those in difficulty a bit of breathing room, in the hope that things will get better next year," says Agnello, adding that she is not optimistic about the future.

Agnello and Polide both managed to produce other types of honey this summer aside from acaia, but those harvests were disappointing.

Chestnut trees, for example, flowered for just a few days -- rather than two to three weeks as normal -- because of the unusual early heat.

"The production was worth less than it cost to feed the bees," said the apiculturist, who was also forced to feed his colonies in September, boosting them so they can survive the winter.

"If other difficult seasons follow, it will put the (business) at risk," he said.

He keeps his head above water by breeding and selling queen bees, needed to establish new colonies -- but if the sector remains in crisis, that income stream will also be threatened.

Polide said the EU should do more to protect beekeepers and consumers from those who dress inferior honeys up as the real thing.

But despite the stress and hard work, he said there was no question of him giving up.