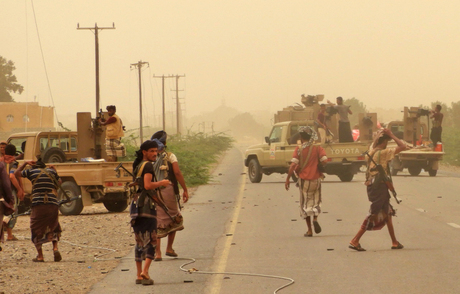 Top officials from Saudi Arabia and the UAE, key players in a coalition fighting Yemeni rebels, have discussed military cooperation following a positive response by Riyadh to a truce offer from the insurgents.

The two officials, who spoke late Sunday, also discussed the "challenges" facing the Gulf region and "their implications on the security" of the region, WAM said.

Last week, Prince Khalid said on Twitter that a truce offer made last month by Yemen's Huthi rebels was "perceived positively" by the kingdom and hoped it would be "implemented effectively".

Since 2015, Riyadh has led a military coalition in support of Yemen's internationally recognised government against the Iran-backed Huthis.

The conflict has killed tens of thousands of people, most of them civilians, according to humanitarian organisations, and left Yemen faced with what the UN terms the world's worst humanitarian crisis.

The Huthis offered to halt all attacks on Saudi Arabia as part of a peace initiative to end the devastating conflict, later repeating their proposal despite continued air strikes from the Saudi-led coalition.

The offer came after the Huthis claimed responsibility for attacks on September 14 against two key Saudi oil installations that temporarily knocked out half of the OPEC giant's production.

Riyadh and Washington, however, blamed Iran for the attacks -- a charge denied by Tehran.

never understood the notion of men fighting in skirts

Lol the skirt was an Indian import that they seemed to feel more at home with lol
At any rate they have been in this senseless war for so long both fighting the same Iranian supplied yemeni army and it suddenly daunted them that they should be joining forces?
Brilliant strategy looool