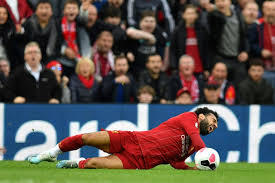 Mohamed Salah sustained a twisted ankle in Liverpool's late victory over Leicester according to reports on Monday, but the Egyptian could still return for the Premier League leaders' clash at Manchester United on October 20.

Salah hobbled off in added time during the 2-1 win over the Foxes on Saturday after being caught on the left ankle by a lunge from Hamza Choudhury.

The England under-21 international was booked, but Liverpool boss Jurgen Klopp believed he should have seen red for a challenge he branded "dangerous as hell".

Salah had already been excused from Egypt's friendly against Botswana on October 14 with Pharaohs head coach Hossam El Badry saying his star player "must rest".

The Liverpool Echo reported: "Salah suffered a twisted ankle in the challenge, and while there is no timescale set on his return, Liverpool are hopeful there is no long-term damage."

After Salah had been withdrawn, Liverpool struck late through James Milner's penalty to open up an eight-point lead at the top of the Premier League.

And next up they can rub more salt into Manchester United wounds with the Red Devils already 15 points behind their rivals down in 12th.

"Salah has not yet been ruled in or out of that fixture, with it being too early in the healing process for the medical staff to make a decision," added the Echo's report.