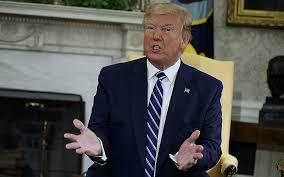 Donald Trump won the presidency with vows to take a new approach on the world stage and end America's "endless wars."

But barely a year before he is up for re-election, Trump's ambitions to chart a fresh course have repeatedly been thwarted, with the U.S. president either shifting under pressure or facing tough diplomatic realities.

Trump is still searching for a signature diplomatic success to showcase to voters, with his made-for-television summits with North Korean leader Kim Jong Un failing -- so far -- to result in a visible victory.

In less than a year, Trump has struggled twice to extricate the United States from Syria.

Late Sunday, after Trump spoke by telephone with Turkish President Recep Tayyip Erdogan, the White House said that the United States would be pulling advisers from northeastern Syria who had served as an effective buffer.

The move amounted to a green light for Turkey to attack U.S.-allied Kurds in Syria, who played a vital role in crushing the Islamic State group but who Erdogan links to separatist militants at home.

Trump initially defended his decision by renewing his criticism of foreign entanglements, an enduring principle for the US leader since his days as a media-friendly real estate tycoon.

The United States, he tweeted, "was supposed to be in Syria for 30 days," but that was "many years ago."

"We stayed and got deeper and deeper into battle with no aim in sight," he said, renewing his view that U.S. troops had succeeded in defeating IS and had no further mission.

But Trump changed gears after unusually strong criticism within his Republican Party, whose leaders warned that he was abandoning allies, taking his eye off a potential resurgence of the Islamic State group and strengthening Russia and Iran, the backers of President Bashar al-Assad.

The episode was eerily similar to developments in December when Trump, again after speaking to Erdogan, tweeted that the United States was withdrawing from Syria.

His comments caught allies and advisers off guard and triggered the resignations of his respected defense secretary, Jim Mattis, and the State Department pointperson on fighting the Islamic State group, Brett McGurk.

But that time as well, aides walked back Trump's decision, casting the withdrawal as a gradual process.

Trump's Syria strategy "is more about domestic political considerations," a Western diplomat said, drawing a parallel to his actions in Afghanistan.

Robert Menendez, the top Democrat on the Senate Foreign Relations Committee and vociferous critic of Trump's foreign policy, accused the president of listening more to Turkey and Russia than the US military.

"Once again, the Trump administration has upended longstanding policy with an impulsive, politically driven decision that will sacrifice long-term U.S. national security interests," he said in a statement.

On Afghanistan, Trump has vowed to end America's longest war and pull troops first deployed after the September 11, 2001 attacks.

Known for trusting his instincts, Trump took the audacious step of inviting leaders of the Taliban -- whose extremist former regime welcomed Al-Qaeda -- to talks at the Camp David presidential retreat around the time of the September 11 anniversary.

Trump, who again faced Republican criticism, abruptly called off the talks and ended a year of negotiations led by a veteran diplomat, Zalmay Khalilzad.

Trump attributed his decision to the killing of a US soldier by the Taliban, who had stepped up their violence even while negotiating with Washington.

Trump later in September had another chance for a history-making summit as he held out the possibility of meeting Iranian President Hassan Rouhani on the sidelines of the United Nations General Assembly.

France, which has taken the lead in seeking to reduce tensions, went so far as installing a secure telephone line in New York to connect the two leaders.

But Rouhani, according to diplomats, balked, insisting that Trump first ease crippling sanctions that he unilaterally imposed last year on Iran when he walked out of an earlier accord negotiated by former US president Barack Obama.

Trump has succeeded in meeting three times with North Korean strongman Kim, whom he has since described as a friend.

But beyond the pageantry, there is little sign of a permanent accord. North Korea has kept firing rockets and working-level talks with the United States ended acrimoniously last weekend in Sweden, with Pyongyang demanding that the United States end its "hostile" actions.

Trump, the self-styled master negotiator, has also struggled to reach an agreement with China after months of escalating trade tensions that include tariffs on billions of dollars worth of goods.