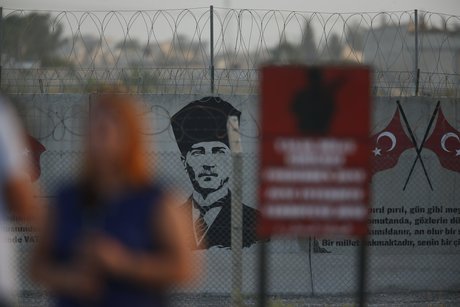 The exercise comes amid Iran's opposition to Turkey's planned invasion of northern Syria against Syrian Kurdish fighters there. The Syrian Kurds were U.S. allies in the war against the Islamic State group.

The sudden Iranian drill was announced on Wednesday. The TV report says it's overseen by Maj. Gen. Abdolrahim Mousavi, chief of Iran's army.

However, the state TV didn't mention the expected Turkish operation nor elaborate on the number of troops taking part in the drill in Qushchi in Iran's Western Azerbaijan province. The area is about 620 kilometers, or 385 miles, northwest of Tehran.

Iran and Russia are both key allies of Syrian President Bashar Assad's long-embattled government. Both have troops on the ground in Syria. While they may publicly oppose a Turkish incursion into Syria, they probably don't mind an operation that diminishes the Kurdish forces.

Dudes.. be careful where you're drilling.. you might come across hassin's hiding place.. and dig him up... The poor dear has been in hiding.. since the summer of 2006.. when he followed your orders and started the war... He'd promised us Lebanese a calm summer.. but hey.. when the boss orders you.. to do something.. you do it.. or you're for it... If you guys dig him up.. he'll have go to find.. a fresh new place to hide in... It's enough that every couple of weeks he has to look for new digs.. pun intended.. 'cause the Israelis keep finding him... He and his Suleimani bodyguards can't figure out how.. But I do.. they won't listen to me... If I told him once.. I told him a million times.. hassin, buddy.. when you hear someone shout Marco.. DON'T ANSWER POLO.. IT'S A TRAP!!..

Today, Turkey could reconquer the Middle East with its armed forces, and this includes Iran. If I were Khamanei, I wouldn’t play with fire.

Although I dont condone war but my darker sad can only hope they both go at each other and leave the rest of the area in peace. Where is the great Syrian Army with all this? how can they condone that Turkey may invade their "sacred" soil?