Hariri Tells Visiting U.N. Official that Lebanon is Committed to 1701 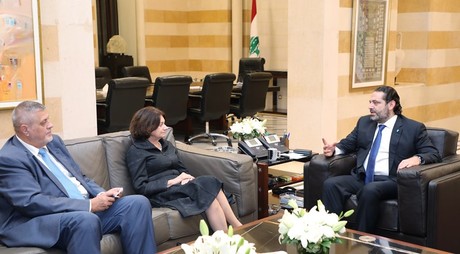 During the meeting, which included a working lunch, discussions focused on the situation in the region and the challenges that Lebanon is facing to preserve its security and economic and social stability.

Hariri assured DiCarlo of Lebanon's “adherence to U.N. Resolution 1701, the government's commitment to the disassociation policy and its rejection of anything that would drag Lebanon into conflicts or interference in the internal affairs of the Arab countries,” the premier’s office said.

He added that he is working with President Michel Aoun, in cooperation with Speaker Nabih Berri, to fortify Lebanon in the face of regional and economic risks and to carry out administrative, sectoral and monetary reforms, in parallel with the efforts to launch the Capital investment program, knowing that the financing of the first stage of the CIP was secured during the CEDRE Conference.

Hariri also highlighted the responsibility of the international community, and the United Nations in particular, to help Lebanon prevent attacks and put an end to the Israeli violations of UNSCR 1701, which succeeded in maintaining calm for thirteen years, noting that this responsibility comes within the framework of preventing any regional conflict in the grave situations that most countries in the region are experiencing.

He also congratulated DiCarlo on the success of the U.N. Special Envoy for Syria, Geir Pedersen, in forming the Syrian Constitutional Committee to draft a new Constitution, as a step towards reaching a political solution that “must include the return of displaced Syrians to their country.”

Moreover, Hariri pointed to the responsibility of the United Nations in mobilizing the international community to “help Lebanon bear the burden of one and a half million displaced Syrians.”

After the meeting, DiCarlo said: “I am very happy to be here in Beirut. It is my first time in Lebanon and I am very pleased to have been received by the Prime Minister. I am going to be meeting here with a number of other Lebanese officials and stakeholders. I had an excellent discussion with the Prime Minister regarding many of the initiatives that he is undertaking particularly in the area of economic reform. We talked about regional tensions and the work that the U.N. is doing here, my colleagues from the Special Coordinator’s Office, UNIFIL and humanitarian and development colleagues.”

“I assured the Prime Minister of our continued support for all the people of Lebanon and our continued support for hosting the number of refugees that Lebanon hosts, and we are very grateful for the generosity of the Lebanese people in this regard. I have to say that it has been a very good start to this visit and I look forward to further conversations not only with officials but also with representatives of the civil society and to see this beautiful city,” DiCarlo added.

Hariri Tells Visiting U.N. Official that Lebanon is Committed to 1701

and who would doubt his claim?

The ANC killed the competition then robbed the country... and these people are you role model ? LoL what an inferior being... lemme guess, you must be one of the sheep who follow blindly thieving politicians or a terrorist organization like Hizbala.

The UN should be meeting with Hezbollah to discuss 1701. Hariri is a figurehead.