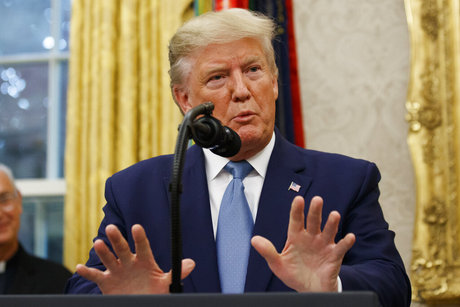 Trump -- who pulled out US troops from the area in what was interpreted as a green light for Turkey to assault Kurdish militias previously allied with the United States -- insisted that Washington "does not endorse this attack."

The president said in a statement that Turkey had committed to "ensuring no humanitarian crisis takes place -- and we will hold them to this commitment."

Trump has come under withering criticism in Washington, including from senior members of his own Republican Party, over what they see as a betrayal of the Kurdish militias that fought alongside US forces to defeat the Islamic State movement in Syria.

He is also being blamed for what critics say will be a boost for remnants of the Islamic State, often known as ISIS.

Addressing some of these criticisms, Trump said in his statement that Turkey had promised to protect civilians and religious minorities.

"In addition, Turkey is now responsible for ensuring all ISIS fighters being held captive remain in prison and that ISIS does not reconstitute in any way, shape or form," he said.

"We expect Turkey to abide by all of its commitments, and we continue to monitor the situation closely," he added.

The statement was the latest in a long sequence of mixed signals from the White House, which said it would not stand in the way of a Turkish offensive against the Kurds, while at the same time threatening the NATO ally with economic punishment if it oversteps.

"If Turkey does anything that I, in my great and unmatched wisdom, consider to be off limits, I will totally destroy and obliterate the Economy of Turkey (I've done before!)," Trump tweeted on Monday.

Trump says pulling the small, but politically significant, force of Americans out of the Syria-Turkey border area is part of his mission to extract the US from military conflicts across the Middle East.

Earlier, he tweeted a denial that this constitutes a betrayal of the Kurds.

"We may be in the process of leaving Syria, but in no way have we Abandoned the Kurds, who are special people and wonderful fighters," he tweeted.