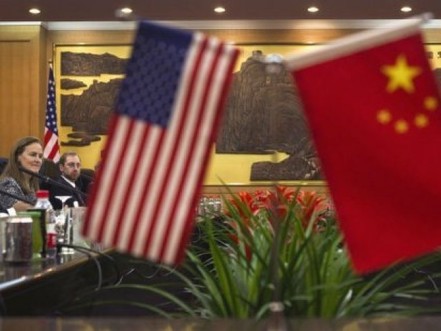 China on Wednesday slammed NBA commissioner Adam Silver's defense of free speech, cancelling a basketball fan event and lashing him in the state-run press, as Apple was warned it could be the next Western firm punished for supporting democracy protesters in Hong Kong.

The NBA had been looking to cement its already huge popularity in the lucrative China market this week with a pair of annual pre-season exhibition games, but those plans were thrown into disarray by a tweet from Houston Rockets general manager Daryl Morey backing the pro-democracy movement in Hong Kong.

Silver and the NBA initially responded to Friday's tweet with statements that American politicians branded as caving into China.

But Silver, in Japan for another pre-season exhibition event involving the Rockets, then provoked China's ire on Tuesday when he said the NBA supported freedom of expression.

"Silver's about-face, which will definitely give a shot to the arms of the rioters in Hong Kong, shows his organization is willing to be another handy tool for U.S. interference in (Hong Kong)," the state-run China Daily newspaper said in an editorial.

An editorial in the nationalistic Global Times said there was now "little room for reconciliation" as the issue had escalated into a clash of values between China and the U.S.

The NBA has built a lucrative Chinese fanbase, thanks in part to the popularity of former Rockets center Yao Ming.

The fallout deepened on Wednesday as Silver prepared to fly to Shanghai for the Chinese games between the LA Lakers and the Brooklyn Nets.

The Shanghai Sports Federation scrapped a planned fan event on Wednesday night to promote the Lakers-Nets game, slated for the following day.

Speculation has grown in the US that the games themselves –- another is to be held in the southern city of Shenzhen on Saturday -- could be cancelled.

Crews rappeled down glass-and-steel office buildings in Shanghai's glittering financial district to peel off 13-story promotional images of Lakers superstar LeBron James on Wednesday, while at the arena where the games are to be played workers removed Nets, Lakers, and corporate logos from lamp-posts and walls.

The NBA also abruptly cancelled afternoon press events featuring the two teams just 10 minutes before the first was due to start, giving no explanation.

Rockets star James Harden, who is popular in China and earlier this week apologized to Chinese fans over Morey's comments, on Wednesday fell in behind Silver and free speech.

"Everybody should, how they feel and their thought process, be able to speak it,” he said in Japan.

Several young men playing a pick-up game in Beijing said they were disappointed by Morey's tweet and the NBA's response.

"I don't think I can continue to watch (NBA) games," said 26-year-old Fu Hao, sweating after playing on an outdoor court.

Hong Kong has endured nearly four months of protests that were ignited by a now-scrapped plan to allow extraditions of criminal suspects to the mainland.

They snowballed into a movement calling for more democratic freedoms and police accountability, the biggest challenge to China's rule of Hong Kong since its handover from the British in 1997.

Chinese state media has repeatedly warned foreign firms against speaking out or voicing support for protesters, warning it could cost them access to China's market of 1.4 billion people.

Tech giant Apple, which has a huge presence in China, on Wednesday became the latest target.

"Apple's approval for the app obviously helps rioters," the article said. "Does this mean Apple intended to be an accomplice to the rioters?"

The article then cautioned that: "The map app is just the tip of the iceberg", alleging a song supporting Hong Kong independence had also appeared on its music store.

"Nobody wants to drag Apple into the lingering unrest in Hong Kong. But people have reason to assume that Apple is mixing business with politics, and even illegal acts," it said.

In an illustration of companies trying to toe the line, American shoemaker Vans removed some design submissions from a competition, including one apparently praising Hong Kong's pro-democracy protesters.

In a Facebook post explaining its decision last week, the firm said it had "never taken a political position", without mentioning the Hong Kong protests or China.