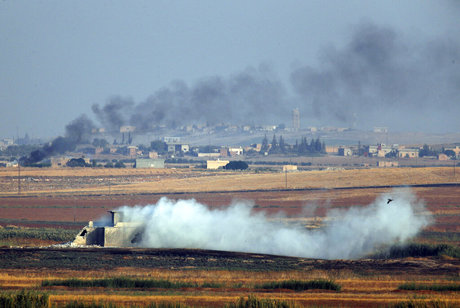 Lebanon’s Foreign Ministry on Wednesday condemned a Turkish military operation against Kurdish militants in northeast Syria as an “aggression” and “occupation.”

The Foreign Ministry “considers the military operation that the Turkish armed forces are carrying out in northern Syria an aggression against a brotherly Arab country and an occupation of Syrian territory which will subject its people to killing and internal and external displacement,” it said in a statement.

It accordingly called on the Turkish leadership to “reevaluate its decision,” urging it to “work with the relevant nations on restoring stability in Syria and implementing the international resolutions.”

The ministry also stressed the importance of “the unity of Syria’s people and land.”

Turkey launched a broad assault on Kurdish-controlled areas in northeastern Syria on Wednesday, with intensive bombardment paving the way for an invasion made possible by the withdrawal of U.S. troops.

President Recep Tayyip Erdogan announced the start of the attack on Twitter and soon after jets and artillery targeted Kurdish positions along the full width of the border, sending thousands of civilians fleeing their homes.

The move had seemed inevitable since U.S. President Donald Trump on Sunday announced a military pullback from the border, but the attack triggered international condemnation and an emergency meeting of the U.N. Security Council set for Thursday.

The White House said Wednesday the Turkish assault was a "bad idea" after it had effectively gifted Erdogan a green light and smashed the U.S. alliance with the Kurdish forces, who spearheaded five years of ground battles against the Islamic State group in Syria.

It’s time for turkey to acquire new territory. I would normally object such moves because I support the Kurds in their right to rule themselves but Syria deserves to shrink to the size of Lebanon’s. lol @ the daktoor Bashar.

Lebanon is the portion of Syria occupied by foreign forces.