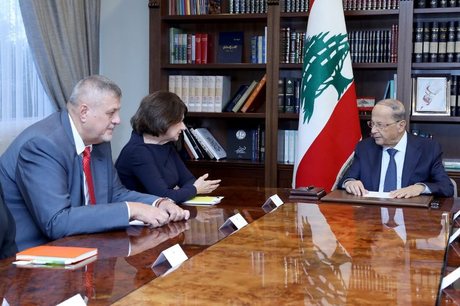 President Michel Aoun on Thursday described Turkey’s military operation against Kurdish militants in northeast Syria as a “dangerous development in the war’s course in Syria.”

“Lebanon is following up on the developments and it hopes that they won’t have repercussions on Syria’s unity and the situation of Syrian refugees,” Aoun told U.N. Under-Secretary-General for Political and Peacebuilding Affairs Rosemary DiCarlo in a meeting in Baabda.

“The negative repercussions of the presence of Syrian refugees in Lebanon are negatively affecting its situations,” Aoun added.

“Lebanon’s plight from the growing numbers of Syrian refugees is being aggravated by the financial siege and the sanctions, which are affecting the banking sector in particular and the economic situations in general, knowing that Lebanese banks are abiding by all the instructions and regulations and their banking operations are under the direct supervision of the central bank,” the president went on to say.

Mashallah he has a brilliant mind.....