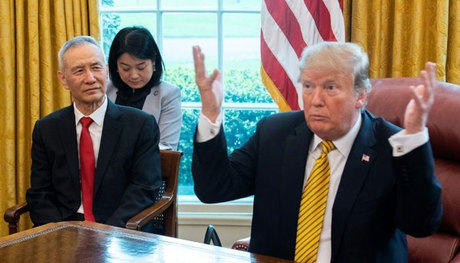 U.S. President Donald Trump announced Thursday he will meet with China's top trade envoy as the two sides pursue fraught negotiations that this week appeared headed for a dead end.

In a tweet, Trump said he would meet the following day with Vice Premier Liu He, who returned to the negotiating table on Thursday amid a blitz of aggressive U.S. maneuvers, with hopes for a grand bargain between the economic powers this week near zero.

Trump's announcement sent U.S. stocks surging, helping erase much of the losses from earlier in the week and calming fears after an overnight news report said the Chinese side could leave early given the slim progress in preliminary talks.

But the atmosphere for the high-stakes parley was shifting rapidly. Liu smiled broadly as he was greeted by U.S. Trade Representative Robert Lighthizer and Treasury Secretary Steven Mnuchin on Thursday morning.

Late Wednesday, Liu had told dignitaries in Washington that the Chinese side had come "with great sincerity" and hoped to reach a "common understanding" with the Americans.

Still, there was no hiding the sharp deterioration in relations this week. U.S. duties on $250 billion in Chinese imports are due to rise in five days.

Trump -- who has taken the global economy on a white-knuckle ride since launching multi-pronged trade offensives with China, Europe and other allies last year -- reiterated Thursday that the outcome was down to him.

"Big day of negotiations with China. They want to make a deal but do I?" he said on Twitter.

"I meet with the vice premier tomorrow at the White House."

The measures have outraged Beijing and in the process penalized major players in the artificial intelligence sector, in which the U.S. and China are intense rivals.

But Trump's attitude toward the process is subject to sudden change, given the churning pressures competing for his attention.

He is as usual engulfed in turmoil, facing Democrats' intensifying impeachment probe and stinging bipartisan criticism for allowing a Turkish assault on Washington's Kurdish partners to go forward by pulling American forces away from the border in northeast Syria.

Markets over the prior 24 hours had pinned their hopes on media reports that Beijing will propose a partial trade deal to prevent further escalation.

China is willing to bump up purchases of U.S. farm exports and make other concessions, but will stop short of addressing Trump's core grievances, according to reports from Bloomberg and The Financial Times.

In return, Beijing would expect a pause on planned increases in U.S. import tariffs, which are currently scheduled to increase in waves through December.

"It's either a big deal or no deal," he said, adding that any attempt to reach an incremental bargain would be a "miscalculation by China."

But Clete Willems, a former Trump trade adviser, said Wednesday that a partial deal could be the president's best move.

"I don't think the administration should be afraid of a partial deal," he told CNBC, adding that a bargain that came with some structural reforms to China's economy could leave Trump with enough leverage to pursue more reforms down the road.

China's purchases of U.S. soybeans jumped in September after stagnating during the summer. But warning signs for the global economy have blared ever louder in recent weeks, however, increasing the pressure on both sides to reach a deal.

U.S. central bankers believe the trade war is raising the chances the United States could slip into recession.

"We all know the next round of tariffs is going to hurt the United States as much or more than China," Wendy Cutler, vice president of the Asia Society Policy Institute, told AFP.

"I think neither side will admit it but I think they're both under pressure to find a way to forestall the next set of tariff increases," she said. "Every month that these trade talks continue, there's more and more friction in the relationship."