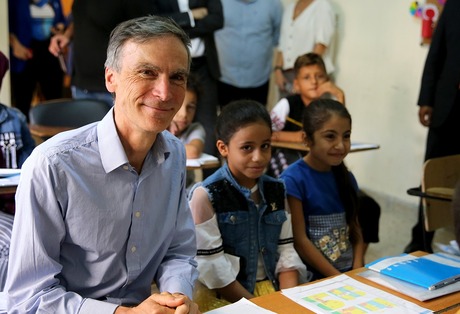 British Minister of State for the Middle East and International Development Andrew Murrison ended a two-day visit to Lebanon on Friday, reiterating the UK’s “long-term commitment to supporting a strong and prosperous Lebanon” and announcing “over $41 million towards Lebanese host communities and refugees alike,” the British embassy said.

In the Bekaa, Minister Murrison visited an Informal Tented Settlement and saw how tech solutions (iris scanning) are used to ensure UK aid “only goes to those who need it the most to meet their most basic survival needs,” the embassy statement said.

He also met Syrian refugee families and heard from them about their living conditions and challenges they face in Lebanon, including how they view the prospect of returning to Syria.

In Tripoli, Murrison met with host communities to see “the positive impact UK aid is having on people’s lives through the Lebanese Host Communities Support Program (LHSP) in partnership with the Ministry of Social Affairs and UNDP. He announced a new $39 million to LHSP in support of delivering better public services, economic opportunities and promoting social stability to the most vulnerable Lebanese and refugees.

He also met with MARCH NGO’s youth group in Tripoli who have overcome barriers, transforming from two feuding neighborhoods into partners working for a better future for their communities.

At the non-formal education center run by UNICEF, Minister Murrison announced over $2.5 million of UK aid funding to UNICEF’s non-formal education program. He saw how non formal schooling is delivered to out of school refugee and Lebanese children, and how the UK is working with the international community to “ensure a generation of children do not miss out on education.”

Heading south to the village of Toul, he saw how UK aid support to the Global Mine Action program is making safe over 1.1 million m2 of land, with over 6,500 men, women and children benefitting from mine risk education.

Minister Murrison also met with Syrian analysts to discuss the latest situation of refugees in Lebanon and Syria.

Speaking at the end of his visit, Murrison said: “I am delighted to be on my first official visit to Lebanon as Minister for the Middle East, especially at a time when the UK and Lebanon’s bilateral trade relations are growing stronger. The UK remains a steadfast partner of the Government of Lebanon, and supports the need for economic reforms so that Lebanon can fulfill its potential, including through increased trade and investment.”

“I reiterated the UK’s recognition of Lebanon’s generosity hosting people fleeing Syria, and got to see how UK aid is supporting both the host communities and refugees,” he said.

“We have been clear: we want Syrians to return home safely, consistent with international law. The Syrian regime must immediately return to peace talks to end this senseless suffering,” Murrison added.