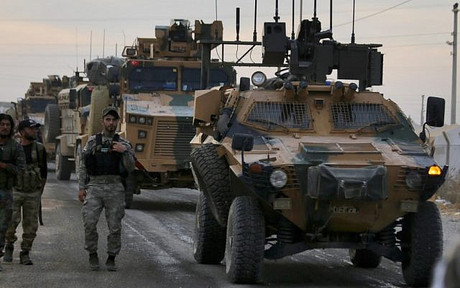 Turkey denied on Saturday targeting a US base in northern Syria after the Pentagon said its troops had come under artillery fire.

"There was no shot fired whatsoever on the US observation post," Defence Minister Hulusi Akar said in a statement to state news agency Anadolu

He said Turkey had returned fire on Friday after Kurdish People's Protection Units (YPG) shelled a Turkish border police station from hills located one kilometre (1,100 yards) away from the US observation post in Syria.

The Pentagon said an explosion occurred "within a few hundred meters" of a US position near the Syrian town of Kobani, and warned that the US was prepared to meet aggression with "immediate defensive action".

Akar said: "All necessary precautions were taken so as not to damage the US post."

He said the Turkish forces had stopped firing "as a precaution" after the Americans contacted them.

"Anyway, the necessary coordinations are being conducted between our command centers and the Americans," Akar added.

US troops pulled back from positions along the Turkey-Syria border last week ahead of a Turkish operation against Kurdish militants in Syria.

The YPG was a close ally of the US in its fight against the Islamic State group but is seen by Ankara as a "terrorist" off-shoot of Kurdish insurgents in Turkey.