Exposed and Under Fire, Syria's Kurds May Turn to Damascus 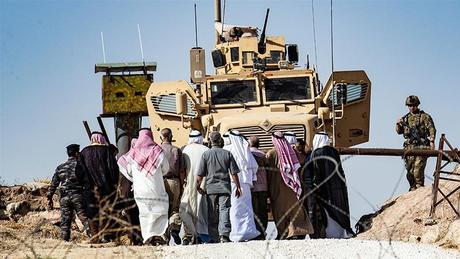 A US withdrawal from Syria's northern border this week has exposed Washington's Kurdish partners to a Turkish assault, creating conditions for a rapprochement with Damascus that both sides need badly, analysts said.

The main US partner in the years-long battle against the Islamic State group, Kurdish forces were left to fend for themselves after allied US forces pulled back on Monday.

What the Kurds resent as a US betrayal paved the way for a Turkish operation that has seen Ankara bombard positions since Wednesday and send forces across the border.

With little leverage left in the game, Syria's Kurds -- viewed by Ankara as "terrorists" -- may have to thaw ties with President Bashar al-Assad's Russian-backed regime.

"The absence of US forces could cause them to turn to Damascus for assistance," Syria expert Samuel Ramani told AFP.

Marginalised for decades, Syria's minority Kurds carved out a de facto autonomous region across some 30 percent of the nation's territory after the devastating war broke out in 2011.

After the Islamic State group swept across the region in 2014, the Kurd-led Syrian Democratic Forces (SDF) mounted a fierce defence of their heartland and became the US-led coalition's main partner on the ground.

Middle East analyst Jean-Pierre Filiu argued that the leadership of Turkey's outlawed Kurdistan Workers' Party (PKK) -- of which the SDF is an offshoot -- was paying a price for two misjudgements.

"It believed its political project could take root in Syria without clearly antagonising the Assad regime, and it thought it could build a lasting alliance with the United States thanks to the anti-jihadist fight," he said.

In the short term, according to Alexey Malashenko of the Dialogue of Civilizations Research Institute, the Kurds should expect no help from Damascus to fight off Turkey.

"Assad cannot give it to them for fear of harming relations between Moscow and Ankara," he said.

The Kurds have already opened talks with Damascus on a long-term rapprochement but negotiations have stalled over outstanding issues, including the form of government in Kurdish regions and the future of forces stationed there.

Damascus, which has accused the Kurds of treason over their alliance with Washington, rejects their self-rule and wants central government institutions restored in Kurdish-held areas, especially in the oil-rich east.

In comments published Tuesday, Deputy Foreign Minister Faisal Mekdad said Damascus was ready to welcome the Kurds back into the fold but stressed the government would not relinquish control over "a single pinch of dirt" in the war-torn country.

Waddah Abed Rabbo, editor-in-chief of the pro- government Al-Watan newspaper, said the Kurds would have to disband their fighting force as part of a rapprochement.

"They have to hand over all their heavy weapons to the Syrian army... and return to the military's ranks so they can fight Turkey's incursion together," he wrote in an editorial.

Experts say these demands may be hard for the SDF to accept.

"The SDF does not want to reconcile with Assad on terms placed down by Damascus, which would amount to surrendering their autonomy," said Nicholas Heras, an analyst at the Center for a New American Security.

"Turning to Assad might work to keep Turkey at bay, but it would be a bitter pill for the leadership of the SDF to swallow."

Despite this, Turkey's invasion has bolstered calls for deeper engagement from both the Kurds themselves as well as the regime and its Russian backers.

Moscow on Thursday said it would "push to get contacts going between Damascus and Kurdish organisations" to calm the situation on Syria's northern border.

For its part, the Kurdish administration has said it "looks forward to Russia playing the role... of a backer and guarantor" in talks with Assad's regime.

In a statement carried by state news agency SANA on Wednesday, Syria's foreign ministry said it was ready to "embrace" Syria's Kurds if they chose to "return to their senses".

After successive Russia-backed victories against rebels and jihadists since 2015, Assad's regime controls some 60 percent of the country.

But resource-rich areas in eastern Syria, essential for the regime's supply of oil, water and wheat, remain under Kurdish control.

"On a strategic level, Russia and the Syrian regime stand to benefit the most from (Turkey's) operation," said the Eurasia Group, a political risk consultancy.

"The benefits of forcing the Kurds to move to a deal that allows President Bashar al-Assad to reassert control over the resource-rich east are immense," it said.

As Washington prepares its exit, the Eurasia group predicts the "Kurds will rebalance and allow Assad's forces to incrementally expand in the east".

Faced with Turkish fire and difficult demands by Damascus, the Kurds are seemingly stuck between a rock and a hard place.

"Any solution will likely not be on the Kurds' own terms, because they don't have leverage" Ramani said.