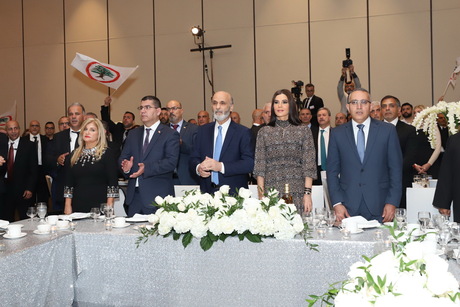 Lebanese Forces leader Samir Geagea has lamented that the other parties in the government are only united on the approach of “looting the state.”

“How can situations not reach this extent and everyone is witnessing how governments are being formed. They superficially carry a very beautiful label, national unity, but practically they are nothing but governments of contradictions, governments of an arbitrary settlement that brings together parties who are only united over one thing: looting the state,” Geagea said in a speech in Canada’s Toronto.

The LF leader also decried that “some top officials are denying the presence of a severe crisis such as the one we are going through.”

“They are insisting on considering it mere rumors related to an international, universal conspiracy against Lebanon and they are not admitting that their management of the state is what has brought the situations to the current level,” Geagea added.

The true and only strong fearless man left in Lebanon..
Stuck solid to his beliefs and never swayed his principles..
Love or hate him... he is true to his word