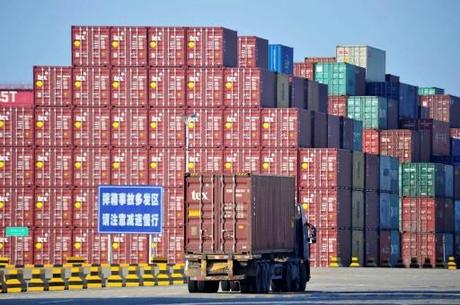 Asian investors on Monday cheered a partial trade deal between China and the United States, sending regional markets rallying, though observers were sceptical about the overall significance of the agreement.

Dealers took their lead from a strong performance on Wall Street after top-level negotiators ended two days of talks saying US tariffs due to take effect this week would be put off and China would ramp up its purchases of US farm products.

They also agreed on other issues including intellectual property, financial services and currencies.

The news provided some much-needed support to Asian markets, with Hong Kong up 0.8 percent and Shanghai jumping more than one percent despite data showing Chinese imports and exports fell more than forecast in September.

Sydney and Singapore both put on 0.5 percent, while Taipei and Seoul also rallied more than one percent.

While the deal was welcomed by Trump as "the greatest and biggest deal ever made for our Great Patriot Farmers in the history of our Country", analysts were a little more guarded.

"Let's not get carried away," Raoul Leering, head of international trade research at ING Bank NV, told Bloomberg News. "There is a very tough journey ahead for the US and Chinese negotiators to cut a deal that really has substance."

He added: "While we are still waiting on the details on concessions made by both sides, it seems these are still the low-hanging fruits that Beijing has offered in the past.

"Some of the more challenging issues, such as the US blacklisting of Chinese tech companies and possible limits on US institutional investors investing in Chinese equities, don't seem to be on the agenda."

In early European trade, London was down 0.1 percent while Paris and Frankfurt each shed 0.4 percent.

On currency markets, the dollar dipped against most higher-yielding, riskier units owing to improved optimism.

The pound, however, was suffering selling pressure after European leaders appeared unmoved by a hailed Brexit breakthrough on the Northern Irish question between the leaders of Britain and Ireland.

The sterling rallied last week after British Prime Minister Boris Johnson and his Irish counterpart Leo Varadkar said after talks they could see a route towards striking a possible divorce deal.

But European officials said Sunday there were still obstacles on how to manage trade and customs between EU member Ireland and Northern Ireland, which is a part of Britain.

"Eurozone negotiators and country leaders appear to be underwhelmed by the elaborate detail of the proposed Irish backstop solution," said Jeffrey Halley, senior market analyst for Asia-Pacific at OANDA.

"Like the apparent trade deal that isn't... precisely no details of the nuts and bolts of Messrs Johnson and Varadkar's breakthrough conversation of last week have been released."

Oil prices dropped more than one percent after Friday's more-than-two-percent surge fuelled by a blast on an Iranian tanker as well as news of the mini trade deal.