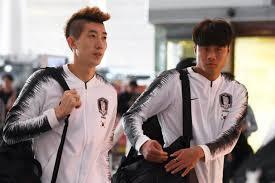 South Korean footballers departed for Pyongyang on Monday to play a World Cup qualifier against North Korea amid deadlocked talks over the North's nuclear arsenal.

The teams -- with Tottenham's star forward Son Heung-min included in the South Korean squad -- are expected to face each other at the Kim Il Sung Stadium on Tuesday.

But Pyongyang refused to hold direct talks with Seoul on the logistics for the match, denying South Korean fans and journalists permission to travel with the team.

South Korean players said the absence of cheering fans will be a first.

"It's much better to play in a packed stadium rather than an empty one, but I think we'll be able to play a good match if we use it as motivation," said defender Kim Min-jae before boarding a flight to Pyongyang at Beijing airport.

The South Korean footballers were accompanied by a delegation of 55 people, limited to players, coaches and staff.

Broadcasters in the South said that plans to air the match live had fallen apart, with some media reporting that there may be attempts to carry the North Korean feed.

The match comes in the wake of a series of North Korean missile tests that raised tensions in the region, and after the breakdown of talks with the United States over Pyongyang's weapons programs.