FIFA President Visits Hariri: We Will Build Headquarters for the LFA 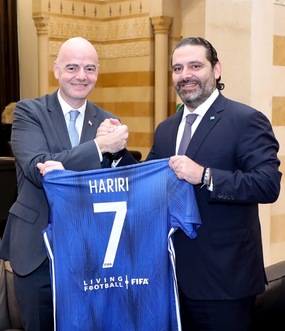 Prime Minister Saad Hariri on Monday met at the Grand Serail with FIFA President Gianni Infantino, who was accompanied by a delegation from the Lebanese Football Association (LFA) led by Hashem Haidar.

The meeting focused on the launch of a project to enhance football in schools and allocate a land to build the headquarters of the Lebanese Football Association. The delegation also presented to Hariri the FIFA shirt number 7 and the FIFA flag.

After the meeting, Infantino said: “We are here in Lebanon these days in order to launch a very important project for FIFA, which we call football for schools. It is a project in which we want to address 700 million children all over the world, with an education program, where we bring football to the schools and we bring lessons for life to the children, all the lessons and all the values that football can bring. We wanted to start this project here in Lebanon because we immediately had the help of the Lebanese football association and of the Lebanese government. We are working together in this project to bring it to the children from the whole country, from different backgrounds and this is the beauty of football and the beauty of the passion and the love for the game, but also the importance of education.”

“We took the occasion to speak to the Prime Minister about Lebanese football in addition to world football and I am very happy that we could agree that FIFA can invest, with what we call the FIFA Forward program, significant amount in Lebanon to build the new headquarters and the technical center for Lebanese football,” he added.

“This will allow Lebanon to be state of the art when it comes to the football development and football organization. It will allow also FIFA to organize events in Lebanon. We are looking forward to the new headquarters and new technical center,” Infantino went on to say.

For his part, Haidar said: “We were honored to meet with Prime Minister Hariri and discussed with him several sports topics, most notably the launch of the FIFA Football Project for Schools.”

“This project is of great importance in preparing a young generation to become players for clubs and teams. We also discussed the construction of headquarters and a training center for the Lebanese football association, funded by FIFA. We asked Prime Minister Hariri to provide a land for this project and he was very positive. This is a very important project, because FIFA will fully implement it, and we can get a lot of assistance,” he added.

“The atmosphere of the meeting was very positive, and I would like to thank the President of FIFA for his interest in Lebanon, his visit to this country, and the fact that he is giving a special importance to Lebanon and the Lebanese football,” Haidar said.