Abu Faour at PSP Demo: Bassil Going to Syria to 'Beg for Presidency' 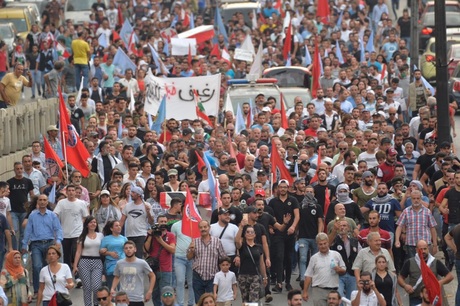 “You are rallying at this square, the square of national unity, freedom, sovereignty and independence, the square of Gebran Tueni, Samir Kassir and Rafik Hariri. You are rallying to raise your voice in defense of freedom and democracy, which are facing new attacks,” Abu Faour told a demo organized by the Progressive Socialist Party at downtown Beirut’s Martyrs Square.

Hundreds of PSP supporters had marched from the Cola area to the square via the Salim Salam road and tunnel.

The coordinator of the now-defunct March 14 General Secretariat ex-MP Fares Soaid and representatives from the Kataeb Party took part in the rally at Martyrs Square alongside a number of PSP ministers and MPs.

“You are witnessing how forgotten security agencies, once described by them as ineffective, have today turned into secret police that pursues democratic and free people at the request of those who are monopolizing power, in an attempt to repress freedoms,” Abu Faour added, referring to the State Security agency, which has recently summoned PSP activists to interrogation over social media posts.

“We call on Prime Minister Saad Hariri to rein in these agencies’ attacks on freedoms… We will not accept the presence of a police agency that resembles the ones in dictatorial regimes,” the minister went on to say.

As for the controversy over the foreign minister’s plans to visit Syria, Abu Faour said Bassil is not going to Syria to return the refugees but rather to “beg for the presidency” because “he has been told that the path towards the presidency goes through Damascus.”

The deficit can be attributed to the diversion of funds into blablablablablabla's deep and wide luv tunnel as virile young men penetrate his luv tunnel and deposit their loads of lubricants seeking pleasure and fulfillment.