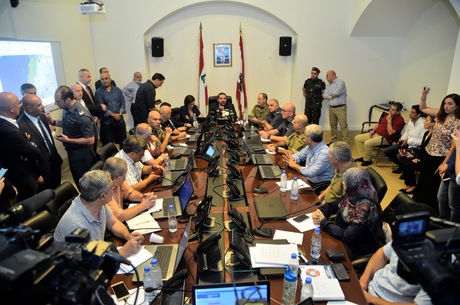 Prime Ministers Saad Hariri on Tuesday chaired part of the meeting of the National Emergency Crisis and Disaster Management Authority that was held at the Grand Serail to follow up on the ongoing operations to extinguish the massive wildfires that engulfed several Lebanese areas.

During the meeting, Hariri said: “Unfortunately, we are witnessing frequent fires, this happens all over the world and we are exerting all possible efforts with the operations room and all the relevant bodies, including the army, security forces, civil defense, governors, municipalities, civil defense and the Red Cross to extinguish them as soon as possible.”

“The Minister of Interior and I contacted a number of countries to send additional helicopters and aircrafts to extinguish the fires that have broken out in many Lebanese regions and to combat them and limit their spread. We are exerting great efforts and I thank all those here for everything they are doing. The High Relief Committee will identify the damages in homes and properties. We will work around the clock and do our duty as a state to complete the firefighting process,” Hariri added.

“The most important thing for me is that there are no losses of lives and certainly we will investigate what happened to know how it started. I do not want to accuse anyone, but a clear investigation should be conducted to see if what happened is deliberate. If it is, those who did that should pay the price, and if it is not, it could be due to the climate change that the world is witnessing and that is causing disasters. The most important thing is that there are no human damages. The physical damages can be compensated,” the premier went on to say.