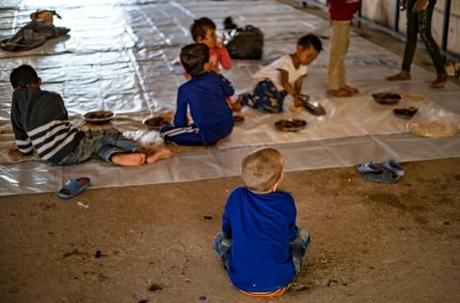 Relatives of French jihadists and their families held in Syria say the Turkish offensive and the ensuing advance of Syrian President Bashar al-Assad's forces have added to the urgency of bringing them home.

Hundreds of radicalized French men and women traveled to Syria to join IS at the peak of the group's dominance, sometimes taking their children with them.

Most were captured when the extremist group was militarily defeated by Kurdish-led forces, backed by an international coalition.

Turkey is now taking control of parts of the area as it presses its operation against Syrian Kurdish fighters. At the same time Assad's forces are advancing from the south to contain the Turkish offensive.

Referring to the fate of the jihadists, Asma, a French woman whose brother is being held in a Syrian Kurdish prison, asked: "If Bashar al-Assad retakes the prisons, what is going to be their future?"

"Either they will be tortured or they will be used for bargaining or they are going to escape," said Asma, who like other sources interviewed by AFP for this story asked for her name to be changed.

The worst scenario, she said, would see them end up back in the hands of Islamic State, allowing "a terrorist organisation to be rebuilt".

The fate of the foreign fighters and their relatives has divided the Turks and their Syrian Kurdish foes, with both sides accusing each other of freeing prisoners in a bid to sow chaos.

"I'm hoping for just one thing -- that the state repatriates them," said another woman Estelle, who believes a male relative is being held in Derik prison in Syria.

"If Bashar al-Assad's regime retakes the prisons I do not know if it will be possible to go and find him," she said.

The issue of the repatriation of French jihadists and their families has been a longstanding controversy in France, with families taking legal action in a bid to force the state to allow them home.

France has said it will consider requests for their return on a case-by-case basis only and has so far only taken back a handful of children.

Paris insists that adults who fought for IS should be tried in Syria and Iraq.

Turkey on Monday accused Kurdish forces of deliberately releasing IS prisoners held at a prison in the Syrian border town of Tal Abyad "in an attempt to fuel chaos in the area."

Kurdish officials, for their part, claimed that Turkish bombardments had allowed nearly 800 relatives of foreign IS fighters escape from a camp for the displaced.

At least three French women who were being held in that camp have fallen into the hands of IS, according to messages sent to relatives and seen by AFP.

One of the men who took charge of the women said, according to the message: "We are your brothers from the Islamic State, we will take you to safety in the desert."

Marie Dose, a lawyer representing several jihadists' families, accused the French government of "handing them on a platter to IS."

Sarah, whose sister Safia left in 2014 for Syria with her two children and gave birth to two more while there, said she received a message from her sibling saying that she had fled Ain Issa camp for the displaced after being ordered out by the Kurds.

"They are in a critical situation," said Sarah.

"They are in the desert all on their own, in the hands of goodness knows who...We would prefer see her in prison in France than being abandoned to her fate."

Asma acknowledged that the fact that the jihadists and their families had traveled to Syria to voluntarily join IS raised "a moral question".

"But it is not by abandoning them that we will prevent radicalization. I have the impression that the French state today wants simply to eliminate them."