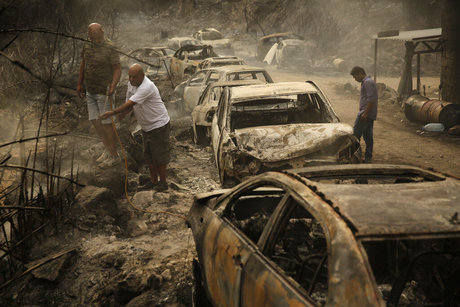 A major fire that had been raging since Monday night in the Chouf area of Mechref was put out earlier in the day with the help of UNIFIL forces. UNIFIL peacekeepers, vehicles and firefighting vehicles later moved to Mazraat al-Dahr and al-Dibbiyeh to contribute to firefighting efforts there.

New fires were meanwhile reported in the evening in the northern Metn area of Mazraat Yachouh and the Keserwan area of Ghazir.

The wildfires forced some residents to flee their homes in the middle of the night on Monday, while others were stuck inside as the flames reached villages south of Beirut, especially in the Chouf and Aley regions.

A heat wave in the region coupled with strong winds intensified the fires that began a day earlier in mostly pine forests around the country and three provinces in neighboring Syria. A man died of a heart attack after taking part in the firefighting efforts in Chouf as several injuries were reported.

"Your planes are now fighting fires in Lebanon as we speak here," Defense Minister Elias Bou Saab said during a visit to Cyprus.

Prime Minister Saad Hariri said if the fires turn out to be intentional those behind it "will pay a price." Hariri added that an investigation will be opened to know what caused the fires.

In Damour, a coastal village south of Beirut, more than a dozen charred cars were seen on the side of a road. Most of the homes nearby escaped the damage.

As the fires raged overnight, al-Jadeed TV correspondent Halima Tabiaa burst into tears while live on TV, saying she could hear people scream for help inside their homes but no one could reach them. The footage has since gone viral on social media and international and Arab media outlets.

Interior Minister Raya al-Hassan said Greece would send two aircraft in response to a request from Lebanon, adding that Jordan has also expressed readiness to send assistance to Beirut.

Authorities meanwhile announced that foreign aircraft and army helicopters are not equipped to take part in firefighting operations at night.

The National News Agency said four advanced aircraft from Greece and Jordan were expected to arrive later on Tuesday.

In neighboring Syria, fires spread in the coastal provinces of Latakia and Tartus, as well as the central province of Homs, but authorities there brought all the fires under control.

a despicable troll with no life to speak of.