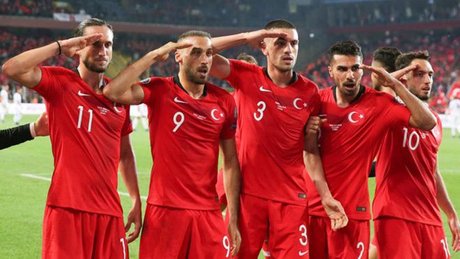 UEFA announced on Tuesday that it is opening disciplinary proceedings against Turkey into "potential provocative political behavior" by their players after making military salutes in their last two matches.

In both their Euro 2020 qualifiers against Albania on Friday and France on Monday, Turkish players made the salutes -- seen as supporting Turkey's current military operation in Syria -- as they celebrated late goals.

UEFA said in a statement that it has appointed an 'Ethics and Disciplinary Inspector' to investigate.

On Friday in Istanbul, players saluted after Cenk Tosun scored the only goal against Albania in the 90th minute. On Monday in Paris, they repeated the gesture after Kaan Ayhan equalized with nine minutes to play and again after the final whistle.

Earlier on Tuesday, Turkey's sports minister Mehmet Muharrem Kasapoglu voiced support for players who saluted the country's soldiers during their game at the Stade de France.

Kasapoglu said the controversy was unwarranted, and pointed to the fact that French star Antoine Griezmann had also given a military salute to French President Emmanuel Macron in June.

"Those who remained quiet about Griezmann's military salute are trying to distort our national footballers' nice salute," Kasapoglu said in a televised press conference, holding up a picture of Griezmann's salute.

He said critics were trying to distract from Turkey's success in staying top of the qualifying group.

"Those who are trying to block out their failure on the pitch should give up on their efforts. The result is clear," Kasapoglu said.

Kasapoglu also warned UEFA to be "prudent" in its investigation of the salutes.

European football's ruling body UEFA had already said it would "examine" the salute against Albania.

"Personally, I have not seen this gesture, which could be considered a provocation," UEFA's press chief Philip Townsend told the Italian Ansa news agency on Monday before the France game.

"Does the regulation prohibit references to politics and religion? Yes, and I can guarantee you that we will look at this situation."

In Turkey, it is common for celebrities, including footballers, to show their support for the security forces after attacks or during military operations.

At the world gymnastics championships in Stuttgart on Saturday, Ibrahim Colak made a military-style salute on the podium after winning gold in the men's rings event.

Turkey's operation against Kurdish militants in Syria, launched a week ago, has been widely criticized by the international community but has drawn widespread support at home.