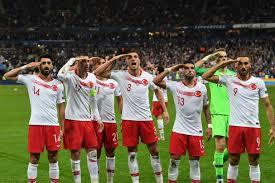 Regional footballers in some parts of Germany were warned on Tuesday to expect "heavy penalties" if they imitate the military salutes of the Turkish national team during goal celebrations.

The military gesture has become a hot topic after Turkey players saluted to celebrate goals during internationals against France in Paris on Monday and last Friday against Albania.

The salute is seen as a reference to Turkey's military operation against Kurdish militants in Syria, which has been condemned by both France and Germany.

Germany has a Turkish population of around 2.5 million people and there were at least two cases in Bavaria last weekend of teams saluting after scoring in local leagues, prompting separate warnings from the Bavarian and North German Football Associations.

"Insults and provocations have no place on or off the pitch and will not be tolerated", Guenter Distelrath, President of the North German Football Association (NFV), told the AFP subsidiary SID.

In a statement, the Bavarian Football Association (BFV) also warned of "heavy penalties" against "players who abuse football with politically motivated provocations".

On Tuesday, Turkey's sports minister Mehmet Muharrem Kasapoglu described the controversial goal-celebration gesture as a "nice salute", but European football's ruling body UEFA has said it will "examine" the incidents.

In Monday's 1-1 draw against France in Paris during a Euro 2020 qualifier, Kaan Ayhan equalized for Turkey, but reportedly did not join his team-mates in giving a salute.

Ayhan and his Turkish national team-mate Kenan Karaman, who also plays for Fortuna Duesseldorf, had been warned by the German outfit about making the gesture on national duty.

Duesseldorf sports director Lutz Pfannenstiel said he had "made the club's position clear" to the pair, adding Bundesliga side Fortuna distanced itself from "supposedly politically motivated actions that violate the values of the club".

The German Football Association (DFB) has taken a similar stance.

On Sunday, Germany internationals Emre Can and Ilkay Gundogan, who have Turkish roots, apologized after they both clicked 'Like' on a picture of the Turkish footballers saluting during Friday's 1-0 win over Albania, which they both later removed.

Team director Oliver Bierhoff said the pair "made a mistake", but had "made it very clear it was not a political statement" to the squad.

"We stand for openness, diversity and tolerance and are against all forms of violence and discrimination," added Bierhoff.