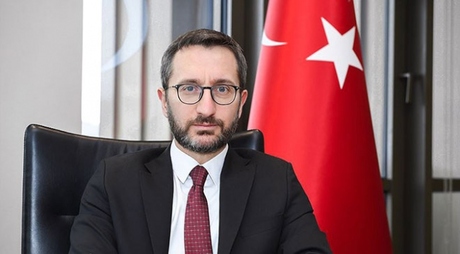 Turkey dismissed global opposition to its military operation in Syria on Tuesday and slammed a "dirty deal" between President Bashar al-Assad's regime and Kurdish forces as U.S. troops began their withdrawal from the battle zone.

Turkey's operation against Kurdish militants in Syria, launched a week ago, has been widely criticized by the international community, with the US, a NATO ally, slapping sanctions on Ankara.

"We will continue to combat all terrorist groups, including Daesh (the Islamic State group), whether or not the world agrees to support our efforts," Fahrettin Altun, communications director at the Turkish presidency, told AFP.

He said the Kurdish militants had deliberately set free Islamic State (IS) prisoners from their detention camps in northern Syria in order to frighten Western powers.

"In addition to releasing thousands of Daesh prisoners from detention centers, the group deliberately targeted civilians, including reporters, near the Turkish-Syrian border before striking a dirty deal with the Assad regime," Altun said.

The Kurdish People's Protection Units (YPG) struck a deal with Damascus over the weekend in order to win its protection against the Turkish onslaught.

The deal has led to the return of Syrian forces in the Kurdish-controlled region, including the key town of Manbij, in their most significant deployment since they started withdrawing troops from the area in 2012.

"We urge all parties to look past biased media reports and fake news to appreciate Turkey's role as a bulwark against global terror," Altun told AFP.

He dismissed claims by U.S. Defense Secretary Mark Esper that Turkey's incursion had "resulted in the release of many dangerous ISIS detainees."

"It is no secret that the careers of many U.S. officials, military and civilian, depend on the perpetuation of the Daesh threat in Syria," he said.

"In recent days, we have seen US officials use their official powers to spread fake news about the situation in northern Syria and cover up crimes committed by the PKK's Syrian offshoot."

Ankara says the YPG is a "terrorist" offshoot of the outlawed Kurdistan Workers' Party (PKK), which has waged a bloody insurgency inside Turkey since 1984.

Altun said people in Turkey, where the operation has widespread support, were confused about Washington's approach.

"They question why the United States, our NATO ally, would refrain from supporting our counter-terrorism efforts," he said.

"They wonder why America offers no remedy to the refugee crisis. They try to understand why Washington opposes the creation of a safe haven for refugees in northern Syria."

The number of Syrians in Turkey is estimated at over 3.6 million people as of June 2019, and consists mainly of refugees of the Syrian Civil War.
Syrians in Turkey - Wikipedia
https://en.m.wikipedia.org › wiki › Syrians_in_Turkey

Yes, thanks to regime change. The FSA who was trained, heavily armed, and financed by the US and other states were abandoned in 2017 by them. Now they are backed by Turkey.