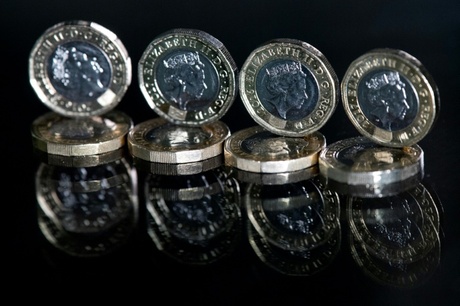 Sterling slid Wednesday on a report that a Brexit deal might be impossible unless the UK government budges from its stance, dealers said.

In what has already been a topsy-turvy week, the pound was catapulted on Tuesday to the highest levels against the dollar and euro since May, propelled by Brexit deal hopes that now appear to be fading somewhat.

Despite the modest losses on Wednesday, sterling nonetheless held at elevated levels.

Adding to the gloom, the European Union's chief Brexit negotiator Michel Barnier warned senior officials that "significant issues" remain in the way of efforts to agree a deal with London on the eve of a key summit.

In late morning deals, the British pound weakened versus the euro and dollar, while London stocks also lapsed into the red.

"It was reported the EU said a deal was impossible unless the UK moves, which has dashed hopes for the possibility of an agreement being reached soon.

"Much of the major gains that were made yesterday were driven by the prospect of a deal being achieved, so now some dealers are reversing their positions."

Irish Prime Minister Leo Varadkar, speaking before leaders of the bloc's member states meet on Thursday and Friday, said he remained hopeful that Britain would secure a deal.

Officials said talks could always resume next week and a special summit be called just in time for British Prime Minister Boris Johnson to fulfill his pledge to take Britain out of the EU on October 31.

Traders set aside official UK data showing that inflation held at a near three-year low in September, boosting consumers amid Brexit turmoil.

"For traders, the focus is Brexit and the fear of deal slipping away is creating the selling pressure on sterling," said ThinkMarkets analyst Naeem Aslam.

Conversely on Tuesday, the pound had jumped to a five-month high of $1.28. The euro meanwhile slumped to a May-trough at 86.26 pence.

Stock market sentiment was bolstered somewhat on Wednesday by an overnight Wall Street gains after a strong start to the US earnings season.

Hong Kong's stock market also climbed after suffering a brief mid-session drop after the city's leader Carrie Lam was forced to abandon a State of the Union-style policy speech owing to heckling by opposition lawmakers.

Shanghai ended lower with investors moving cautiously as China said it would take "strong measures" after the US House of Representatives passed a bill sought by pro-democracy protesters in Hong Kong that aims to defend civil rights in the city.

If passed by the Senate, the law would end the Hong Kong-US special trading status unless the State Department certifies annually that city authorities are respecting human rights and the rule of law.

Adding to unease was a report saying China wanted the US to remove the threat of new tariffs slated for December before it could ramp up its purchase of agricultural goods, which was part of Friday's agreement.

The Bloomberg News story cited sources as saying Beijing would not buy the $40-$50 billion of products Donald Trump claimed it would unless the levies were lifted.

What report? I'm sorry, AFP did not come in to work this morning. Please try your call again tomorrow.